Numerous juniors and sopho­mores did not receive off-campus per­mission, because of expanded on-campus housing options next year, leaving many unsure of their future housing plans.

According to the Dean of Men and Women’s offices, the numbers are sub­stan­tially lower for off-campus per­mission com­pared to last year. In 2016, 143 men and 110 women were  allowed to live off campus. For the 2017 – 2018 aca­demic year, however, only 82 men and 92 women have been given per­mission so far.

With Koon Res­i­dence set to house men instead of women next year, Dean of Men Aaron Petersen said off-campus per­mission is unlikely to change.

“This year I gained about 50 more beds from Koon and Park Place,” Petersen said. “At this point, we don’t plan on letting any more men off-campus. If we have beds we need to fill, then we have a fiscal respon­si­bility to fill those beds. It’s also a benefit. Having more campus spaces to fill adds to the strong com­munity.”

As a result, many stu­dents housing plans for next semester are uncertain. Junior Nathan Stein­meyer did not recieve off-campus per­mission, which affected his plans to live with friends his senior year, he said.

Both Petersen and Philipp said the process of deter­mining off-campus per­mission is simple and trans­parent for stu­dents. All stu­dents can apply to live off campus, after their freshman year. After the sign-up deadline, the reg­istrar puts the names in a list based on grad­u­ation year and number of Hillsdale College course credits.

Philipp said the deans then go down the list to grant off-campus per­mission.

“The process was estab­lished a number of years ago,” Philipp said. “It was actually created by fellow stu­dents as a lead­ership project. The reason why we go by Hillsdale College credits is that sopho­mores were able to get off before some seniors because of AP and dual-enrolment credits from high school. It’s about the integrity of the office, and we want to make sure nobody thinks we’re playing favorites.”

Some women said they were only credits away from making the cut. Sophomore Haley Hauprich was one of them, and as a result, she can’t rent a house with her two friends.

“I had room­mates and a house all set to go, and since we were given the impression that it was very likely we would receive per­mission, I didn’t really think of a back-up plan,” Hauprich said.   “My two room­mates ended up receiving per­mission, so they are doing their own thing. I was told they make the decision entirely based on how many credits you have taken. Someone who has taken just one more credit than you can receive per­mission, but you wouldn’t.”

While the credit scale for off-campus per­mission hasn’t changed, the number of stu­dents who decline to live off campus has. In 2016, 49 men declined to live on campus, leaving the admin­is­tration scram­bling and calling stu­dents over the summer to offer them spots. The dean’s offered nearly 100 less off-campus spots to men this year, because only nine men declined.

In addition to missing the credit cutoff, many stu­dents said living on campus is a financial burden for them.

“I only have 53 Hillsdale credits, and the girls that received off campus had maybe 60 – 62,” sophomore Katie Zelnak said. “My concern is that I cannot afford the suites, and why would I, as a junior, next year want to live in the dorms?”

Dean Philipp said the admin­is­tration needs to fill all bed’s on campus to help the school’s budget and that they’re willing to help stu­dents with financial need.

“We have to make money, and we have to pay the heat bills and the main­te­nance,” Philipp said. “Our marching orders are to fill as many beds as we can. We’ll encourage those stu­dents who are strug­gling with finances to talk with financial aid for help. We have never closed that door for a student to get off-campus housing due to financial reasons.”

The majority of uni­ver­sities throughout the country don’t require under­grad­uates to get per­mission to live off campus, and several Hillsdale stu­dents said they think the requirement limits their oppor­tunity to govern them­selves.

“Living off campus in an inde­pendent sit­u­ation is an excellent way to practice the self gov­ernment that the Hillsdale admin­is­tration is so eager to preach but so rarely actually allows its stu­dents to practice,” sophomore Kathleen Russo said in a message. Decreasing the on-campus requirement would be ben­e­ficial to the overall aims of the college and its pur­poses.”

Philipp and Petersen said they under­stand the frus­tra­tions of stu­dents who aren’t granted off-campus per­mission but that it is an oppor­tunity to grow Hillsdale’s com­munity.

“I would love to have everyone live on campus, because I like the com­munity it would create,” Philipp said. “But I realize that stu­dents like to have some inde­pen­dence and want that expe­rience of living in apartment with their friends.” 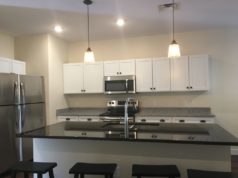 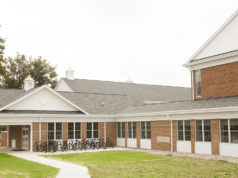