The pilot opens with a repet­itive melody: fast-paced finger-picking on an acoustic guitar. Somehow it feels com­forting. Familiar, even.

The show is called “This is Us,” and the song is “Death with Dignity” by Sufjan Stevens. It’s per­fectly fitting for a story about life and death — but mostly life.

The first shot is a glimpse into the Pearson home. There is a white and yellow, vaguely retro rug that is still rolled up. An open suitcase sits atop one of many card­board boxes. One of them has a message scrawled in black marker: “Family Photos ’75-’79.”

As the melody con­tinues, you meet a pregnant woman and her mostly naked husband in their bedroom. It’s Rebecca and Jack Pearson, and it happens to be Jack’s birthday.

The scene shifts several times as the rest of the main cast is intro­duced. Kate is a woman strug­gling to lose weight as she closes the refrig­erator door on her birthday cake. Randall is a suc­cessful busi­nessman who is greeted with a cake of his own from singing coworkers. Kevin is an actor in a sitcom who feels that he should have achieved more success by today, his thirty-sixth birthday.

In fact, Jack, Kate, Randall, and Kevin have all just turned thirty-six.

NBC’s Golden Globe-nom­i­nated “This is Us” is a little over halfway through its first season and has been renewed for two more. The show airs on Tuesdays at 9:00 P.M. EST, and it may be the best show on tele­vision. In the first episode, “This is Us” presents itself as a story about people who happen to share the same birthday, and it’s believable for a while. In reality, it’s a story about family and love. It’s beau­tiful, viva­cious, and sor­rowful. But what makes the show par­tic­u­larly note­worthy is that it is an excellent depiction of con­ser­v­ative values — almost Christian, even. It’s hard to imagine this is inten­tional. It’s just a good story, and it has good values.

The show por­trays a married mom and dad with kids as the ideal family. Jack and Rebecca have their fights, but they love each other and work through them. They are faithful and in love. Randall is married to Beth, the mother of his two daughters and the woman of his dreams. In time, Kate finds the man of hers. Kevin, on the other hand, con­sis­tently sleeps around, seem­ingly unable to commit to a rela­tionship and unhappy because of it.

In addition, “This is Us” makes an incredible statement about the value of life at any stage. It’s an inher­ently pro-life show without ever men­tioning abortion. The Pearsons — a white couple — adopt a black baby who was aban­doned at a fire station by his drug-addicted father fol­lowing the death of his mother in child­birth. There is no question that this baby’s life has value, though prior to his birth, he was what some in the real world might call a perfect can­didate for an abortion. After all, he’s unwanted — except by Jack and Rebecca.

“The moment I saw you, I knew you were my boy,” Jack tells his child. “You weren’t a choice… you were a fact.”

The show handles ques­tions of race refresh­ingly well. The two white parents work hard to teach their black son that his race doesn’t make him dif­ferent. He’s their son. He’s a Pearson. That’s what makes him who he is, not his skin. The only real acknowl­edg­ments they have that he might be unique come when they seek out a barber who can cut his hair well, or make sure he spends time around black children and adults as well as white. Although the young Pearson starts to wonder about his birth father, he never loses his love and appre­ci­ation for the man who raised him.

The show departs from a tra­di­tional con­ser­v­ative nar­rative with its abrupt inclusion of a bisexual man in a rela­tionship with another man. It’s a twist that feels like the writers pan­icked after sud­denly real­izing they had for­gotten to include an LGBT char­acter.

Nonetheless, so far in the series, his sex­u­ality has not been much of a plot point. Maybe that’s inten­tional. He’s not used to make a political statement. The writers just hope you believe this is who he is. Inter­est­ingly enough, the most impactful parts of the story revolve around his son’s con­fusion as he struggles to feel com­fortable knowing that his father loves a man.

“This is Us” feels like a true story. The char­acters are easy to love, easy to laugh with, and easy to cry with. The acting is phe­nomenal, and the sound­track delights. “Some Day Soon” by Alexi Murdoch and Jackson C. Frank’s “Blues Run the Game” are par­tic­u­larly charming and fit the story bril­liantly.

But the timeline of the story is a funny and clever thing. For fear of spoiling the twist, suffice it to say that the unique way this story is told is almost unde­tectable at first. Then someone lights up a cig­a­rette in a hos­pital, and the thought occurs that maybe the setting isn’t what — or when — it seems. Maybe this is not a story about strangers who happen to share a birthday. Maybe there is a con­nection — some­thing of an “us.” You’ll just have to watch and see. 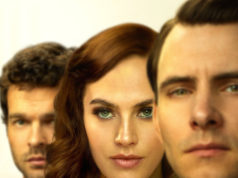