Omicron Delta Kappa is more than the monthly emails that appear in campus inboxes that rec­ognize the work of a leader at Hillsdale College.

Nationally, ODK, the National Lead­ership Honor Society, focuses on rec­og­nizing schol­arship, lead­ership, and campus involvement in various dif­ferent forms. The Hillsdale chapter, estab­lished in 1949, centers itself on “town-and-gown” rela­tion­ships, because no one else focuses on this topic as its primary mission, ODK Pres­ident Christopher Pudenz said.

ODK Sec­retary Larissa Clark said at times there can be a dis­connect between people on campus and locals.

“In reality, we have a lot in common, and there’s things to be gained from having a rela­tionship with each other,” Clark said. “We’re hoping to cul­tivate a better rela­tionship between Hillsdale College and the Hillsdale com­munity.”

Although this year’s 10-senior circle has orga­nized and par­tic­i­pated in several events focused on con­necting the Hillsdale com­munity with the Hillsdale campus, members said there is room for the hon­orary to improve and develop its ini­tia­tives. For that reason, it is moving the appli­cation process for next year’s circle up, and the honorary’s leaders said they expect the appli­cation to be released in the next few weeks with an induction of the new members before spring break instead of the tra­di­tional April date.

“I think there’s a lot of room for growth with ODK,” Clark said. “It’s been a learning curve for us, fig­uring out the best way to leverage this group. Our hope is that looking forward, we can start to lay the foun­dation for further groups to build on.”

In the fall, the student activ­ities office spon­sored a com­munity football night, and ODK helped deliver tickets and fliers to local schools and busi­nesses to promote the free game at Muddy Waters Stadium for stu­dents and their fam­ilies.

The hon­orary also sent its trea­surer, Christian Wiese, to a city planning meeting that dis­cussed the vision for the future of Hillsdale’s downtown. By sending a rep­re­sen­tative, ODK was pre­senting a voice on behalf of the 1,400 college stu­dents that live in the com­munity, Wiese said.

“We’re trying to make a dif­ference to improve our own com­munity as well as give back to the local res­i­dents,” he said.

Addi­tionally, ODK’s con­nection to a national orga­ni­zation gave it the chance to honor A Few Good Men, one of Hillsdale’s GOAL pro­grams, with a grant of $500 to support its Snow Assault Lead Team that sends stu­dents to remove snow from dri­veways in town.

This semester, the hon­orary is seeking to hold an entre­pre­neurship lun­cheon at the end of March, a dif­ferent take on the eti­quette dinner held last year that honored com­munity leaders. The honorary’s members said they hope to team up with other college clubs to invite local leaders and unsung heroes to a dis­cussion panel on campus. Clark said the event would honor these leaders and give them the chance to share their stories and wisdom with stu­dents.

“There’s a lot of beauty in being in a smaller town and putting yourself out there and working to cul­tivate the com­munity,” Clark said. “A lot of business leaders here have done that, and I think we overlook that at the college. We want to tap into the resource of unique indi­viduals who are very pas­sionate about what they do.”

The honorary’s lead­ership said they hope to have next year’s ODK circle help plan and execute the event to better prepare them for their role in the orga­ni­zation their senior year.

“There’s been a lot of fig­uring out the process for our circle, which is why we’re hoping to get the next circle ini­tiated earlier; that way we can work alongside them,” Clark said. “That way they’ll be on a better footing for next year.”

But as the hon­orary plans this entre­preneur event, its lead­ership said it is also hoping to receive rec­om­men­da­tions and ideas from the group’s peers. Those with sug­ges­tions or a desire to get involved can contact Pudenz.

Until then, stu­dents should expect to see more emails about leaders on campus, many of whom are com­mitted to serving the sur­rounding com­munity. Their involvement is an example to others, Clark said.

“They’re thriving and loving what they do,” Clark said. “It shows that it is pos­sible with a busy aca­demic schedule to still be com­munity minded.” 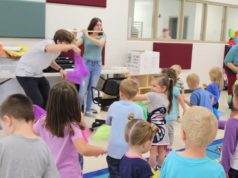 Volunteer to give back to the Hillsdale community 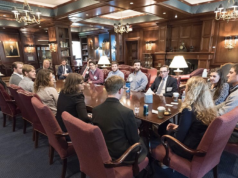 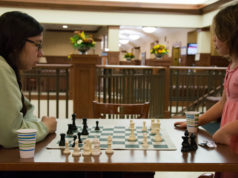