It has been said that every American male is a failed baseball player. Mike Ilitch was no dif­ferent. The son of Mace­donian immi­grants nearly realized the dream of every kid who grew up in the shadow of Detroit: playing for the Tigers.

After serving in the Marine Corps for four years, he returned to Detroit. The Tigers offered him $3,000 to play baseball in their farm system. Ilitch played in the farm systems of many teams during his four-year minor league career which spanned from 1952 to 1955.

For the 1952 season, Ilitch played second base at two dif­ferent levels in the Tigers farm system with the Hot Springs Bathers and the Jamestown Falcons. His career was cut short by a knee injury. In his time with the Tigers orga­ni­zation, he hit .249 with 22 doubles and 10 triples. He never hit a homerun that year.

Ilitch passed away on Feb. 10 at the age of 87. He was born and died in Detroit and is one of the most suc­cessful entre­pre­neurs in Michigan history. He founded Little Caesars pizza in 1959 which has expanded to have restu­arants in all 50 states and many foreign coun­tries.

Ilitch insisted that the company’s head­quarters remain in Detroit. His company also spon­sored the con­struction of the new Little Caesar’s Arena, where the Red Wings and the Pistons will play next season. Detroit will be the only North American city to have four major sports teams playing downtown.

He pur­chased the Detroit Red Wings in 1982 for $8 million and turned them into perennial con­tenders for the Stanley Cup. With his deft business acumen, they won four NHL cham­pi­onships under his own­ership.

Ilitch proved his love for Tigers when he footed the majority of the bill for Com­erica Park, which replaced the old Tigers Stadium. He invested $210 million in the stadium. This was only a hint toward the future financial com­mit­ments he would make for the team.

In 2012, rumors spread that Ilitch was getting older and wanted to make a big push for a cham­pi­onship. Under his own­ership, the Tigers had turned a wildcard bid into a World Series run which ended in defeat after five games with the St. Louis Car­dinals.

Every wide-eyed young sports fan deserves to have his favorite team win a title in his lifetime. Ilitch was for­tunate to have his team win four: in 1935, 1945, 1968, and 1984. But he wanted to give the people of Detroit another title when they needed it most.

In the wake of the 2008 financial crisis, the people of Detroit needed some­thing to believe in. The Lions had just suf­fered the first winless season in NFL history. The federal gov­ernment had to bail out the entire auto­mobile industry.

Ilitch, at the age of 82, signed some of the largest con­tracts in MLB history in order to win a World Series. In 2012, Ilitch signed power-hitter Prince Fielder to a nine-year, $214 million con­tract. It was the fourth-largest con­tract in baseball history. The Tigers lost the World Series that year to the San Fran­cisco Giants in four games.

During the 2013 season, Ilitch agreed to sign starting pitcher Justin Ver­lander, the rookie hero of the 2006 World Series run, to a seven-year, $180 million con­tract extension. No pitcher had ever been offered a con­tract that large. That year, they lost to Boston in the ALCS in six games.

Still, Ilitch was not fin­ished. After watching the team hem­or­rhage money in its quest for a cham­pi­onship for the past two seasons, fans figured that 2014 would be the Tiger’s best shot at a World Series. Ilitch emptied the farm system of talent through trades to acquire Joakim Soria, a former all-star closer, and acquired David Price, the winner of the 2012 Cy Young Award, at great cost.

Signing David Price meant that the Tigers’ starting rotation con­sisted of pre­vious four winners of the Cy Young award between Prince, Ver­lander, and Max Scherzer. Ilitch’s dream became an arms race. These deci­sions showed his love for the team and for the city as well as his desire to leave a parting gift for his city.

In 2014, the Bal­timore Orioles swept the Tigers in the first round of the post­season. But it didn’t matter so much. The fans saw the owner’s dream and they loved him for it.

The Tigers will win a cham­pi­onship someday, and as the players raise the Com­mis­sioner’s Trophy, they will remember Ilitch. We all will. Because he was a ball player with a dream, just like the rest of us. 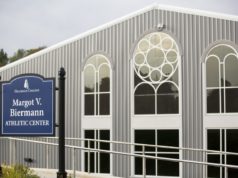