After 18 years at Hillsdale College, Bruce Ikawa — five-time “Jeopardy!” winner, travel afi­cionado, and pro­fessor of accounting — will retire in May, real­izing he only had so many years left to explore, he said.
“He’s just been a great col­league; it’s like the end of an era,” Pro­fessor of Accounting Michael Sweeney said. “I’ve probably spent more time with him than I have with my wife for the past 18 years.”
A native Mid­west­erner, Ikawa earned his doc­torate at the Uni­versity of Michigan and taught at a number of places, including Loyola Mary­mount and Pep­perdine uni­ver­sities. His long­standing right-wing pedigree and famil­iarity with the college after living in Michigan for a time brought him to Hillsdale, he said.
Although he can claim high success rates among accounting stu­dents who have taken the Cer­tified Public Accountant Exam­i­nation, Ikawa said he trea­sured his rela­tionship with the stu­dents even more.
At the beginning of the semester for stu­dents in Accounting 209, Ikawa plays a game to learn stu­dents’ names. When stu­dents raise their hands to answer a question, Ikawa asks them to provide a hint for their name such as a description of an actor, athlete, or bib­lical char­acter with the same name. Senior accounting major Caleb Gatchell said he didn’t remember Ikawa guessing any names incor­rectly, and Ikawa said he some­times remembers the clues, even when he sees stu­dents years later at home­coming.
“He’s a char­acter, a genius, espe­cially with numbers and what he can do in his head,” Gatchell said. “He knows at least a little bit about every­thing, and his breadth of knowledge makes him fun to have con­ver­sa­tions with and inter­esting to get his take on things.”
In addition to hosting an Indian-food themed accounting tailgate, working with the Vol­unteer Income Tax Assis­tance program, and holding an annual senior dinner for grad­u­ating accounting majors, Ikawa has also done a ham­burger-eating chal­lenge with some stu­dents. He and the stu­dents attempted to eat a 2.5‑pound ham­burger and a sub­stantial amount of fries. The first time Ikawa attempted, he almost com­pleted it, but the second time he said he was con­vinced by a student to give up before feeling sick.
“I think if we were going to do it again, you eat the french fries first, because cold french fries are inedible,” Ikawa said.
Sweeney joined him for the burger-eating com­pe­tition, as well as many other activ­ities.
“We are dif­ferent per­son­al­ities, but we meshed together real well,” he said. “We’ve pub­lished some articles together, gone to con­fer­ences together, hosted accounting club parties together, gone bowling. We’ve been to countless football and bas­ketball games together, and we sat in the student section of the football field, before the stu­dents did. We went on a trip to Min­nesota together when the football team made the playoffs.”
Ikawa is most famous at Hillsdale for his five suc­cesses on “Jeopardy!” — the most a single person could win at the time. In his journey, he cor­rectly answered these ques­tions: “Sur­pris­ingly Humphrey Bogart won Audrey [Hepburn] away from William Holden in this 1954 film,” “In 1969 this Supreme Court Justice resigned amid crit­icism of his financial dealings,” and “You’ll find a statue of Puck outside this library,” among many others.
“One thing I’m really good at is old movies,” Ikawa said. “But old movies — if you ask me the movies that are playing now, I don’t know any­thing about them. You have to know broad cat­e­gories, things like geog­raphy, history, lit­er­ature.”
Although his renowned “Jeopardy!” feats occurred in 1990, Ikawa was recently recruited to join team Trivia Newton John in the Stu­dents Activ­ities Board’s trivia night at El Cerrito Mexican Restraunt and led the way to victory.
Senior Sam Clausen, one of the stu­dents on Trivia Newton John, said Ikawa helped the team while getting to know the stu­dents.
“Most of the time he let us come up with an answer and then would confirm it,” Clausen said. “There were a couple times we didn’t listen, and he was right; we were wrong. Another time, we didn’t have a clue. He waited until we gave up before answering.”
Despite Ikawa’s extensive knowledge, Gatchell said he is incredibly clear and easy to under­stand in class.
“Ikawa actually explains what’s going on and why you’re moving numbers,” Gatchell said. “He’s challenging…but I also found him to be pretty clear in class and he takes time to make sure that we under­stand what’s going on.”
Stu­dents know him for his sig­nature, bright Hawaiian shirts and his affinity for trav­eling, an interest that ulti­mately inspired him to retire, real­izing he only had so many years left to explore, he said. Thanks to his wife’s position with an airline company, he’s visited Mon­golia, China, Japan, Vietnam, and France as well as Las Vegas, New Orleans, New York City, and several other cities. He said his favorite excursion was a rafting trip in Nepal in 1990.
He and his wife have a home in Michigan and another in Chicago, and he said he’s looking for a third location, as well. 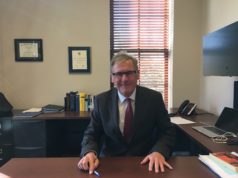 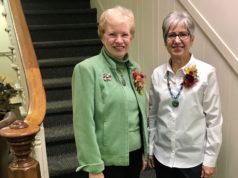 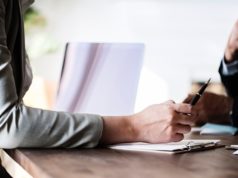