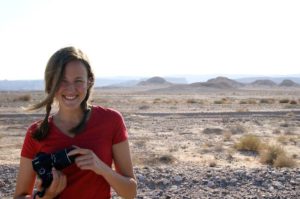 Abigail Gilbert ’14, for­merly Abigail Wood, didn’t expect to end up on camera when she inter­viewed for a job at Channel 8 News in Lincoln, Nebraska. She’d studied English, jour­nalism and phi­losophy at Hillsdale, but she’d only done print jour­nalism. So she was sur­prised when the editor at the station said he hoped she didn’t just want to appear on TV to have “face time.” The thought hadn’t crossed Gilbert’s mind.

“That was the first time I realized I was going to have my face on TV,” she said. But, ever adven­turous and willing, she took the job as a pho­to­jour­nalist, filming stories and appearing on camera every day.

“I would never have thought that I would be a pho­to­jour­nalist because I love print. And I was kind of snooty about the supe­ri­ority of print,” she said.

It wasn’t the first time Gilbert ended up doing the unex­pected. When she inter­viewed for the job, she had recently returned from a yearlong stay in Israel, where she vol­un­teered for a char­i­table organization’s pub­li­cation.

A Nebraska native, Gilbert had planned to return to Nebraska after grad­u­ation and work in jour­nalism, but a family friend asked her to vol­unteer as a graphic designer for Bridges for Peace, a char­i­table orga­ni­zation that runs food banks and other min­istries in Israel. As the arts editor for the Col­legian during her junior and senior year at Hillsdale, Gilbert had very minimal expe­rience in graphic design — only a crash course from fellow editors who designed the page, she said. Gilbert had never flown out of the country, but she said yes and left on her birthday in October 2014.

Gilbert knew a little about Israel through stories from her grand­mother, who loved the Israeli culture so much she visited Israel every year and kept a binder with pic­tures from each of her trips.

“I grew up with the knowledge of Israel, keeping tabs of what was going on and current events over there and who was the prime min­ister at the time,” Gilbert said.

But even with her grandmother’s stories in the back of her head, Gilbert said she didn’t antic­ipate the vibrancy of Israeli culture.

During the year she stayed in Jerusalem, Gilbert said she fell in love with Israeli culture. She traveled around the country and said she found it “surreal” to be in the places where Jesus walked. She helped out in local schools. She joined a church choir. And she made a deal with her neighbor: she would iron laundry in exchange for Hebrew lessons.

“That was such a gift to be able to learn from her and at the same time to have that picture into their culture,” Gilbert said. “They invited me into that. Although that wasn’t hard to find. Everyone invited you into their culture.”

Gilbert herself invited people into the culture: senior Ramona Tausz interned in Israel during the summer Gilbert was there, and the two shared an apartment. Tausz said she was impressed by Gilbert’s kindness and hos­pi­tality, (besides offering her a place to live, Gilbert helped her nav­igate the bus system and find a cell­phone) and also by her passion for the Jewish culture.

“She had this zeal to learn the lan­guage, get to know the people, just to serve and be of service in any way she could,” Tausz said. “She was con­tin­ually edu­cating me and helping me to under­stand things better.”

Gilbert said her time in Israel gave her a “wider lense” for viewing the world — appro­priate, perhaps, for a pho­to­jour­nalist.

Now cov­ering crime stories and the leg­islative beat for Channel 8, Gilbert said she enjoys her work. TV is unlike print, she said, but it’s just another way to tell a story.

She said she is happy to be back in Lincoln, too, and she recently married Hillsdale graduate Colton Gilbert ’15.

Pro­fessor of English John Somerville, who became friends with Abigail after teaching her in several classes, said he’s not sur­prised that she is doing well at her job.

“She’s nat­u­rally good with people and would be the sort of person who would become at ease in front of a camera and would make those she’s inter­viewing com­fortable,” he said.

He added that Abigail was an excellent student and a good friend.

“I think of all the stu­dents I’ve had here, she’s probably one of the two or three I’ve enjoyed the most,” he said. “She had almost the perfect attitude of a student: eager to learn, hard­working, open.”

Somerville summed up the uniqueness and excitement of Gilbert’s post-Hillsdale life and career: “Who would imagine that would happen to anybody?”

Walking in the footsteps of Christ

We’re moving away from the two-state solution, and that’s a good thing