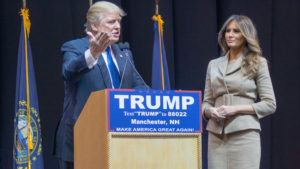 As Pres­ident Donald J. Trump and First Lady Melania glided across the dance floor to Frank Sinatra’s “My Way” at the post-inau­gu­ration Liberty Ball, they probably thought the tune was fitting for the polit­i­cally-incorrect can­didate that rocked the nation.

But by selecting Sinatra’s classic as the song for the first pres­i­dential dance, Trump started the admin­is­tration off on the wrong note and proved to be the very reason for why Ol’ Blue Eyes grew to despise his own song.

“My Way” was written for Sinatra by friend and song­writer Paul Anka. It debuted in 1969 and imme­di­ately began topping the charts in Canada, the UK, and the United States. But after singing the lyrics for barely a year, Sinatra said it quickly became his most hated song.

In a con­ver­sation with song­writer Ervin Drake in 1970, he con­fessed that he “detested” singing “My Way” and thought audi­ences would view it as “a self-aggran­dizing tribute.”
Sinatra’s family has said on numerous occa­sions that the singer hated boast­fulness, and saw the song as the antithesis of the pet peeve he so des­per­ately despised.

In an interview with BBC in 2000, Sinatra’s daughter Tina said because of the song’s immense pop­u­larity, it began to feel like a curse.

“He always thought that song was self-serving and self-indulgent,” she said. “He didn’t like it. That song stuck and he couldn’t get it off his shoe.”

“My Way” may be brag­gado­cious, but it is not a bad song. What makes the pompous and proud lyrics res­onate with audi­ences depending on the sit­u­ation. “My Way” is a song reserved for epic and earned con­clu­sions, not new begin­nings. Just look at the lyrics.

“I’ve loved, I’ve laughed and cried/ I’ve had my fill, my share of losing.”

Ironic lyrics for the pres­ident who said in his inau­gural address just hours before the first dance that, “America will start winning again, winning like never before.” Amer­icans should hope that Trump hasn’t given up on them that fast.

“And now, the end is near / And so I face the final curtain.”

Pres­ident Trump has just started his show on the world stage, and curtain call isn’t for four more years, maybe even longer. He should slow down.

With lyrics about “living a life that’s full” it’s hardly a song the nation would want the com­mander in chief to embrace. With lyrics about reflecting life and remem­bering all the hard times, it’s no wonder that it is most often heard at funerals, retire­ments, and memo­rials.

In 2005, a survey by Co-Oper­ative Funer­alcare put this tune at the top of songs most requested at funerals in the U.K. The inau­gu­ration ball shouldn’t carry the somber, reflective tone of a funeral, but rather the good that comes from the winds of change.

The lyrics of “My Way” truly mean some­thing when the good fight has been fought and the hard work is fin­ished.

“To say the things he truly feels and not the words of one who kneels/ The record shows I took the blows and did it my way.”

Sure, Pres­ident Trump has plenty of reason to cel­e­brate. The political out­sider took on 17 polit­i­cally sea­soned Repub­lican chal­lengers to secure the party’s nom­i­nation. Then, he defeated fundraising giant and former Sec­retary of State Hillary Clinton in perhaps the biggest pres­i­dential upset in United States history.

But it’s been more than two months since Election Day. The pomp and cir­cum­stance of Inau­gu­ration Day is sup­posed to reflect the optimism of the peaceful tran­sition of power, not the com­pla­cency of a well-fought cam­paign.

As Trump said in his inau­gural address, our work as Amer­icans has just begun.

“We, the cit­izens of America, are now joined in a great national effort to rebuild our country,” Trump said. “And to restore its promise for all of our people.”

With immense chal­lenges such as domestic ter­rorism, crip­pling national debt, and border security on his agenda, Trump should save “My Way” for the end of his hope­fully suc­cessful career.