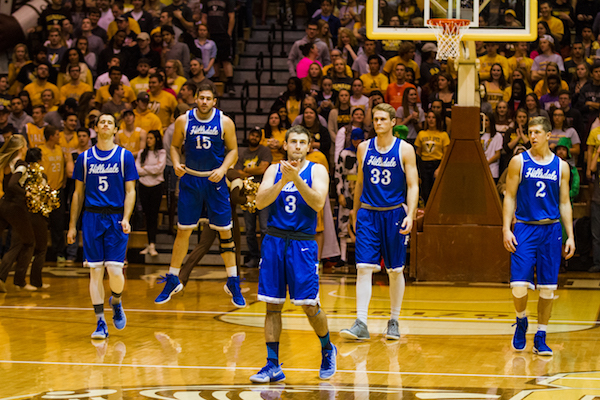 The Hillsdale College men’s bas­ketball team is finding its rhythm at just the right time.

Five players scored in double figures as the Chargers knocked off the Ohio Dominican Pan­thers 80 – 71 on Sat­urday afternoon at Dawn Tib­betts Potter Arena. It’s the Chargers’ third con­sec­utive win and brings them within a half-game of the final GLIAC Tour­nament spot with 6 games remaining.

“Five guys in double digits — that’s when we’re going to be at our best,” Hillsdale head coach John Tharp said. “That was a game that three or four weeks ago we would’ve lost.”

“That was huge. That was one of our emphases here that we felt like we had to do,” Tharp said. “Getting those extra pos­ses­sions was a key to us winning that game.”

In the first half, the Chargers trailed the Pan­thers early as the teams exchanged runs.

Hillsdale responded with five quick points but the Pan­thers hit back-to-back 3‑pointers again to restore a 9‑point lead, 24 – 15. But once again, the Chargers fought back. A 7 – 0 run brought the Chargers within 2 at 24 – 22.

“With this group, we just have to hang in there,” Tharp said. “We even­tually find our rhythm.”

The Chargers built a 7‑point lead in the opening minutes of the second half. The Pan­thers pulled within 3 points twice down the stretch but never drew closer, as the Chargers pulled out an 80 – 71 win.

“We weren’t great defen­sively, but we made enough stops at the end,” Tharp said.

Tharp said the Chargers are “happy” with their three-game win streak.

“This group has kept on bat­tling,” Tharp said. “We’re a little incon­sistent defen­sively, we still don’t run great motion, but we have dif­ferent guys that are making plays for us.”

With their win over the Pan­thers, the Chargers improved to 10 – 10 overall and 6 – 8 in GLIAC play. The Chargers will try to stretch their win streak to four on Thursday when they face the GLIAC South Division-leading Findlay Oilers at 7:30 p.m. in Findlay, Ohio.

Hillsdale’s next home game is next Sat­urday at 3 p.m. against the Ashland Eagles.

On the College and Silence: A letter from Hillsdale College

The Weekly: Lessons from this semester