Debates over the necessity of good chi­rog­raphy (or pen­manship) in today’s digital society have inten­sified ever since the cre­ators of the Common Core excluded hand­writing from their state stan­dards. According to the Common Core guide­lines, public schools need only require man­u­script hand­writing lessons through first grade, and needn’t require cursive lessons at all.

A recent edi­torial in the New York Times quoted an ele­mentary school prin­cipal who ques­tioned whether quality pen­manship was “really a 21st-century skill.” When stu­dents can type every­thing and even sign doc­u­ments with digital sig­na­tures, the argument goes, why should they be graded on good hand­writing and not merely the writing process itself?

This new attitude toward hand­writing is not only detri­mental to children’s edu­ca­tional devel­opment, it’s an attack on the unique human capacity for both lan­guage and beauty. Good hand­writing — both good print pen­manship and good cursive — is not expendable. We must resist this modern war on the art of hand­writing and rein­state a love of quality pen­manship in our culture.

For­tu­nately, some con­tinue to cling to their quill pens and ink. A few states — such as Alabama, Cal­i­fornia, Florida, Louisiana, Texas, and Vir­ginia — even make hand­writing lessons mandatory in their public schools, resisting the Common Core sug­ges­tions and defending them­selves by pointing out that it hones hand-eye coor­di­nation and helps stu­dents retain infor­mation.

Indeed, research shows that good hand­writing is indis­pensable. For one thing, writing by hand directly aids the memory. Occu­pa­tional ther­apist Katya Feder, an adjunct pro­fessor at the Uni­versity of Ottawa School of Reha­bil­i­tation, says that if you write yourself a list or a note — then lose it — you’re much more likely to remember what you wrote than if you just tried to mem­orize it.

Good hand­writing is also crucial for optimal learning and cog­nitive devel­opment. According to Vir­ginia Berninger, pro­fessor of edu­ca­tional psy­chology at the Uni­versity of Wash­ington, the sequential finger actions required to form letters (as opposed to the single action required to type a letter) activate massive regions of the brain involved in thinking, lan­guage, and working memory — the system for tem­porarily storing and man­aging infor­mation. A study she did in 2010 found that “in grades two, four and six, children wrote more words, faster, and expressed more ideas when writing essays by hand versus with a key­board.”

When very young children learn to write well, they also become better readers, according to recent studies pub­lished by Karin Harman James of Indiana Uni­versity. Her research demon­strated that “printing practice improved letter recog­nition, which is the No. 1 pre­dictor of reading ability at age 5.”

And even when stu­dents get to high­school, they may end up wishing they had cul­ti­vated good hand­writing just so that they were forced to learn to write semi-legibly. As Gwen­dolyn Bounds of the Wall Street Journal notes, “in the essay section of SAT college-entrance exams, scorers unable to read a stu­dent’s writing can assign that portion an ‘illegible’ score of 0.”

But this is like advo­cating learning German or French merely because it will improve your own English grammar or increase your vocab­ulary. We should ulti­mately cul­tivate good hand­writing because it is a good in itself, and a reflection of our humanity.

To insist on quality pen­manship is to insist that man is not merely a machine with an auto­matic sig­nature. To insist on beau­tiful, well-formed letters is to insist that words — unique to us rational animals — are beau­tiful and therefore deserving of being beau­ti­fully-formed. Prac­ticing good pen­manship — even in a digital world — is one small way we can resist the modern world’s attack on our humanity.

As a child, I spent hours with my father at the kitchen table, dotting i’s and crossing t’s. His watchful eyes never per­mitted me to make an “o” taller than an “l,” to round the top of a capital “A,” or to slant my lines downward. Words were valuable, he insisted. They deserved to be written with care.

The skill of good pen­manship teaches children the impor­tance of lan­guage and words. Letting go of cursive, letting go of the unique script of the indi­vidual, and letting go of the sense that one’s writing should be beau­tiful, on the other hand, reduces the writer to a typing, texting automaton. The human capacity for com­mu­ni­cation and writing is not merely func­tional, however; it is an expression of our unique position as rational animals who appre­ciate beauty. The lessons of good pen­manship teaches the child our nature as human beings even in an age when most of our work is typed. 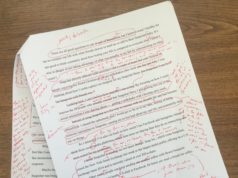