The votes have been cast.

Several of Hillsdale’s Greek houses recently held their pres­i­dential elec­tions for the upcoming semester, and the pres­i­dents-elect of Delta Tau Delta, Alpha Tau Omega, Kappa Kappa Gamma, Pi Beta Phi, and Chi Omega said they are excited to lead their chapters into a new year at Hillsdale.

Many of the new pres­i­dents had already served terms in other officer posi­tions. Sophomore John Duffy, newly elected pres­ident of Alpha Tau Omega fra­ternity, said he is thrilled to con­tinue to serve the chapter, having already served one term as vice pres­ident.

“Main­taining what we do well and improving both our chapter strengths as well our weak­nesses are cer­tainly main goals,” Duffy said of his plans for next semester.

He added that the chapter is specif­i­cally hoping to refine its schol­arship program.

“Addi­tionally, we are planning to reformat some of our spring events,” Duffy said. “We have some really great guys with big ideas moving into lead­ership posi­tions for the upcoming year. I’m excited to see what we can come up with.”

“Josh has already demon­strated his lead­ership as our chaplain,” senior Delt Jonathan Wolff said of Brooks. “He has taken great ini­tiative as our pres­ident-elect, so I’m very excited to see him lead Delt to great things.”

Brooks said he hopes he can do just that.

“When it was announced that I was a can­didate for the pres­i­dency for Kappa Chapter of Delta Tau Delta, the only word to describe my reaction was ‘honored,’” Brooks said. “The brothers in Delta Tau Delta have the pleasure and oppor­tunity to expe­rience char­acter growth and learn lifelong lessons that yield gen­tlemen of noble char­acter.”

Brooks said as pres­ident he wants to guide his brothers to con­tinue taking those lessons they learn in Delta Tau Delta and apply them to their everyday lives on campus.

“We acknowledge the abun­dance of grace and blessings we have received and wish to con­tinue spreading a bit of that to the Hillsdale com­munity as a whole,” he said. “I did not dream of being pres­ident, I’ve only ever wanted to serve the broth­erhood in the best way I could.”

Junior Jonathan Anderson was elected by his brothers as the pres­ident of Sigma Chi. He said he is going to work to have the fra­ternity take back the Schol­arship Cup, recruit strong pledge classes, hold suc­cessful phil­an­thropic events and support those of other Greek houses, and con­tinue promote values of virtue lead­ership.

Junior Maria Theisen, who will serve as pres­ident of Kappa Kappa Gamma sorority, said she is “humbled” to be elected as pres­ident.

“Serving in a lead­ership position in Kappa is some­thing I have been inter­ested in doing since joining,” she said.

Theisen added that she is par­tic­u­larly inter­ested in working to enhance Kappa’s presence on the hill in the coming year, whether through part­nering with other houses and dorms or working with campus orga­ni­za­tions to put together more phil­an­thropic and aca­demic events.

“Kappa has a strong ded­i­cation to tra­dition that has been empha­sized by the past few pres­i­dents in par­ticular,” she said. “I really want to con­tinue placing impor­tance on this value, as I feel it con­tributes to the overall success of our house.”

“My main goal for our house is to con­tinue working to under­stand Chi Omega nationally and what our sis­terhood rep­re­sents,” she added.

Finally, Char­lotte McFadden will be the next pres­ident of Pi Beta Phi sorority.

“Pi Phi has become a home to me and rep­re­sents an extension of the ideals Hillsdale College chal­lenges us to pursue,” she said. “Looking forward to next year, I am excited to work with the Pi Phi exec­utive council to ensure that we have a great year by setting goals as a chapter that will further our values.” 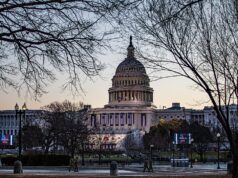 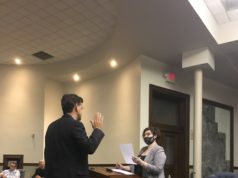 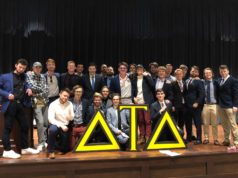