In 1997, however, only 50 stu­dents were in the music department. Today, there are 50 vio­linists alone in the department. Though the school has grown by about 300 stu­dents since 1997, it is the efforts of music department staff such as Pro­fessors of Music James Holleman and Melissa Knecht, who are midway through their 20th year with the department and college, that have resulted in the massive change from a strug­gling program to a thriving one.

When Holleman inter­viewed for the position of orchestra director in 1997, he said he was sur­prised when then-Provost Robert Black­stock asked him what makes a good department chair. He said his answer was con­fusing and unclear, because it took him off guard. Black­stock allowed him to return the fol­lowing Monday to re-answer.

“When I came back, I said to him: ‘Vision. Having a vision of what’s pos­sible, and then fig­uring out what it takes to make it happen,’” Holleman said.

His appointment was a con­scious and directed effort by the admin­is­tration to improve the strug­gling music program. When Holleman was hired, the department had 14 full-time and adjunct pro­fessors and put on 20 – 25 shows per year. Now, there are nearly 40 faculty, and more than 100 per­for­mances each year.

Holleman clar­ified that the plight of the department was not due to a lack of care on the part of the admin­is­tration. In fact, he said  his employment showed that the college hoped to change the program for the better.

“Fur­thermore, anyone who knows any­thing about the liberal arts knows the impor­tance of music,” Holleman said. “Really, it was just a lack of all sorts of ele­ments, such as the timing or the type of stu­dents we were recruiting.”

Holleman said his vision for the department was to rec­ognize that Hillsdale was a liberal arts school and rebrand the department around that idea. Stu­dents in the music program at Hillsdale do not have to be music majors, and can still par­tic­ipate in other activ­ities outside of the music department.

Most music schools, like the ones the music faculty attended, require their stu­dents to ded­icate all of their time to music, and this was, to a degree, how the pre-1997 Hillsdale music department was. Holleman said he realized this was pre­venting those who were musi­cally tal­ented but not inter­ested in a music degree from joining the ensembles.

“One of the keys to our success was opening our doors to every student on campus,” Holleman said. “There are stu­dents who are not music majors but perform at high levels, and we need to be able to tap into that without them having to throw up their hands and say they don’t have time.”

Knecht has seen this struggle to balance school life and music firsthand. Many of her violin stu­dents enter Hillsdale planning to con­tinue on to graduate school, making it dif­ficult for them to manage time.

In fact, she said this is one of the chal­lenges facing the music department going forward: the question of how to deal with classes of stu­dents who are getting smarter and more focused on post­graduate edu­cation.

“As the core is getting larger, we are trying to figure out what to do to make sure music stu­dents have room to par­tic­ipate in music,” Knecht said. “They need that element in their life, and it’s a bal­ancing force that we need to figure out.”

The other aspect of Holleman’s vision of building the program’s size was recruitment. The estab­lishment of Stacy Jones’ position as the music department’s liaison with the admis­sions office helped prevent prospective stu­dents from “slipping through the cracks.”

Instead of actively searching for new stu­dents, the music department — through Jones — is con­tacted by admis­sions when a prospective student expresses an interest in music. Holleman explained this is because of the school’s unique mission.

“If the student doesn’t share the phi­losophy of Hillsdale, they probably will not be a good fit no matter how much effort we put into recruiting them,” Holleman said.

Knecht said the music staff is com­mitted to pro­ducing a good program, which in turn encourages stu­dents to join.

“If we don’t work hard to produce a good program and a good department, we won’t have a job, because nobody will sign up,” Knecht said. “As better players joined our program, the program has looked better, and ulti­mately, it’s become easier for us to recruit stu­dents.”

The com­pletion of Howard Music Hall in 2003 and other improvement of facil­ities has helped in a similar way, showing prospective stu­dents that the college and the department treat musical studies seri­ously.

“Without this building, we would not be doing what we are doing,” Artist and Teacher of Music Debbi Wyse, who was hired in 1981, said. “We have some of the best pianos and practice rooms in the whole nation.”

Wyse said she noticed this in a spe­cific way when a vis­iting artist who had per­formed at col­leges across the U.S. remarked that Howard’s facil­ities were some of the best she had ever seen. Fur­thermore, Wyse added that the com­pletion of the Christ Chapel will launch the department into a new level, as it will free the department from the lim­i­ta­tions of Markel Audi­torium.

“We really do treat every student seri­ously and do what we can to make sure these indi­vidual stu­dents or groups thrive,” Knecht said. “We never take for granted the ded­i­cation needed to keep the program alive.” 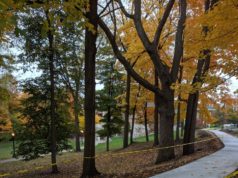 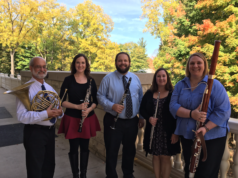