During the cam­paign season, we Never Trumpers said that Trump was a despi­cable man, that he did not truly hold con­ser­v­ative values, that he would lead our country in a deeply mis­guided direction, and that he could never beat Hillary Clinton.

We were wrong about at least one of these things.

Trump ended up defeating Clinton in an (elec­toral) land­slide, far out­pacing his polling pro­jec­tions and mopping up nearly every swing state. If you ask his true believers, it’s only due to our snooty dis­loyalty that he didn’t win more soundly than he did — not an entirely dis­com­forting thought.

The solution is very simple: no matter what happens, we must abandon our pride. The vice of pride has two corollary virtues: humility and gra­ciousness.

If Trump suc­ceeds in passing the con­ser­v­ative agenda many of his sup­porters promise he will, we must be humble enough to acknowledge that our oppo­sition to his can­didacy was in many ways mis­taken. Even now, we must own up to the fact that Trump’s fans already have one point on us: they believed he could be elected, and they were right.

But if Trump’s pres­i­dency is the dumpster fire many of us fear it will be, we must be gra­cious enough to acknowledge that many of his sup­porters were not mali­cious, but merely mis­taken — mis­taken that Trump was our country’s last, best chance to secure its borders, to defend life, to stop the long slide into whatever tyran­nical glob­alist fantasy lies at the cold, cold center of George Soros’ heart. It speaks much more to the lunacy of the Demo­c­ratic Party than to the bigotry of the American voter that so many people who strongly opposed Trump in the pri­maries turned out to vote for him in the general election.

But whether Trump goes on to be a new Reagan or goes down in flames, we anti-Trump con­ser­v­a­tives must be utterly unyielding on two points.

First, we must hold fast to the prin­ciples that Trump still threatens to expunge from the Repub­lican Party and the con­ser­v­ative movement.

If Trump per­sists in promising enormous infra­structure expen­di­tures instead of utterly nec­essary budget cuts, we must con­tinue to oppose him from within. If he reneges on his latter-day promises to uphold life and battle Wash­ington cor­ruption, we must strain to frus­trate his efforts.

We must do this even at the risk of excom­mu­ni­cation from the party Trump now calls his own.

Second, we must con­tinue to insist that we will not support future can­di­dates who conduct their lives and cam­paigns as dis­hon­orably as Trump has done for the past year.

If a suc­cessful Trump pres­i­dency causes us to abandon this prin­ciple, then we have been hyp­ocrites and liars.  It is essential that future can­di­dates know that a portion of the voting public will not support a scorched-earth cam­paign like the one Trump ran, whipping his base into a frenzy by demo­nizing all dis­senters, lying and bul­lying his way to victory. If we yearn for real statesmen, we cannot sell our­selves to dem­a­gogues.

We Never Trumpers got the election wrong. For the sake of the country, we’ve got to get the rest right.

Mr. Egger is a senior studying history and jour­nalism.

Vote for the best candidate, not the lesser of two evils 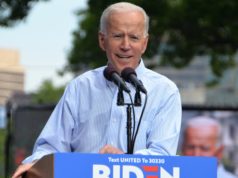