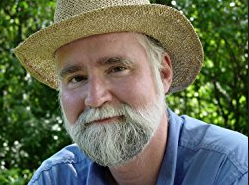 Nicholson Baker’s mind cap­tures the “fine sud­denness” of every moment. His work fixates on the minutiae of the everyday expe­rience while largely ignoring the notion of a plot. His dense, accurate prose tightens the reader’s grip on reality. Two of his more recent projects, however, develop a com­pelling and sophis­ti­cated nar­rative. His two most recent novels, “The Anthol­ogist” (2009) and “Trav­eling Sprinkler” (2013) focus on a single char­acter, Paul Chowder: a minor poet whose neu­roticism, ten­derness, and pen­chant for hyper-accurate description come straight from Baker himself.

“The Anthol­ogist” opens as Chowder’s live-in girl­friend, Roz, leaves him because of his stasis and incon­sis­tency in his own life and in their shared life together. Having com­piled an anthology of poems cen­tered on rhyme, he cannot bring himself to write the intro­duction. The book operates as Chowder’s attempt to explain the impor­tance of rhyme while simul­ta­ne­ously pro­viding a look into the mind of a heartsick man.

The second novel, “Trav­eling Sprinkler,” opens after the pub­li­cation of Chowder’s anthology as he develops the incli­nation to become a song­writer, focused on writing a catchy dance hit. The stunning insight into the history and theory of poetry pro­vides sharp con­trast to Chowder’s seem­ingly friv­olous goal. Yet Baker com­bines these two ele­ments to explore the rela­tionship between song lyrics and poetic verse, as Chowder struggles to write a great love song for Roz.

The two novels should be thought of a sequence — a long rumi­nation on the pos­si­bility of poetry and the role of the artist. Baker employs a first person con­ver­sa­tional nar­ration style that mirrors the uncon­ven­tional method he used in writing both novels.

In his “Art of Fiction” interview with the Paris Review, Baker said he wrote the book by “speak typing” while dressed as Paul Chowder, giving an extremely long dra­matic mono­logue full of digres­sions. This writing method gives the novels a raw, idio­syn­cratic quality while engaging directly with the reader, as if in con­ver­sation. The strange and ami­cable voice is a direct result of Baker’s tech­nique, a com­bi­nation of the­atrics and stream-of-con­sciousness.

In the “Art of Fiction” interview, Baker said, “When I started ’The Anthol­ogist’ in 2003, I dic­tated notes into a digital recorder and tran­scribed some of them and set that aside. And then in 2007, I did a lot of video­taping of myself talking in the char­acter of Paul Chowder. I set up a camera and grew quite a huge beard and tried to be a poet. I had this old fisherman’s hat that I wore. I shot about 40 hours of me in various places, outside, down in the creek.”

Paul Chowder becomes a true alter-ego for Baker, whose natural wit and charm per­meate the nar­rative. Through this alter ego we see Baker’s mind most accu­rately. His mind creates absurd con­nec­tions and obsesses over the unrec­og­nized par­tic­u­lar­ities of life, while expelling empathy and love at every turn.

Chowder loves fully and real­is­ti­cally. He fixates on Roz’s dating life during their romantic hiatus while looking to impress her whenever the oppor­tunity arises. Readers are likely to find Chowder intensely relatable despite his odd­ities and fix­a­tions. He obses­sively cleans his work­space, smokes cigars to emulate other great poets, worries about drone warfare, and fixates on writing poems about flying spoons. At the end of “Trav­eling Sprinkler,” he com­forts Roz after she undergoes a hys­terectomy. This moment is a pro­found real­ization that the couple missed their chance to have children.

In Chowder, Baker con­structs a neu­rotic everyman who is true to life. In his eccen­tric­ities and chal­lenges, Chowder shows us more about our­selves and how overcome our anx­i­eties in order to love fully and deeply.

The novels are also a grand cel­e­bration of poetry from a mildly intel­lectual minor poet. From his position, Chowder can attest to his love of poetry, as well as his struggles with it. A primary fix­ation “The Anthol­ogist” is Chowder’s claim that iambic pen­tameter actually mirrors waltz timing with a three beat line, instead of the common mis­con­ception that a line of iambic pen­tameter (as in Shake­speare) con­tains five beats. His argument hinges on the idea that there is a breath at the end of each line of poetry. Correct or not, these digres­sions show the cre­ative mind at work while also helping to define Paul Chowder as a thoughtful, affable char­acter.

I once asked a friend of mine, a poet from Maryland, what he thought was the common thread in his poetry. He looked at me as if I had asked what year it was. He replied simply, “Well, every poem is a love poem, of course. The reason you write at all, is all out of love.”

This is what Baker proves with these two novels as he dis­tills beauty from the quo­tidian, offering the sym­pa­thetic voice of a bum­bling pro­tag­onist with too much in his heart. Baker uses Paul Chowder to show us part of himself, and in so doing, shows the pos­si­bility that we too can be driven to love so ardently.

I didn’t watch the Bachelor so now you have to