In the wake of Repub­lican Donald Trump’s pres­i­dential victory Tuesday, Hillsdale College faculty expressed uncer­tainty over how a Trump admin­is­tration would affect the college.

Although seven Hillsdale pro­fessors and admin­is­trators pub­licly endorsed Trump in Sep­tember, faculty members said Trump’s policies remain unclear when it comes to higher edu­cation. His win, however, does provide a hope for main­taining Hillsdale’s inde­pen­dence better than during a Clinton admin­is­tration, they said.

When asked how a Trump pres­i­dency would affect Hillsdale, Pres­ident Larry Arnn was honest: “I don’t know,” he said.

But he said he would like to keep Trump to his word.

“The com­pre­hensive inde­pendent reg­u­latory state is dan­gerous to any inde­pendent insti­tution,” Arnn told The Col­legian. “Trump claims he wants to reduce that. I like that.”

Pro­fessor of Pol­itics Thomas West said he wasn’t sure a Trump victory would make a dif­ference for Hillsdale’s state as an inde­pendent institution.

The accred­i­tation process, however, is what con­cerns him the most, West said.

Provost David Whalen, who hasn’t pub­licly endorsed Trump, said growing require­ments from the federal gov­ernment could harm Hillsdale’s ability to determine its own policies. They may also pressure accred­i­tation agencies into becoming more than peer eval­u­ators but enforcers of admin­is­trative policies.

West said, in par­ticular, agencies may have to enforce diversity stan­dards. Hillsdale College doesn’t collect racial infor­mation on its student body or faculty, in the spirit of its mission statement, which states it will educate “irre­spective of nation, color, or sex.”

“There’s probably going to be pressure to increase the number of minorities,” West said. “It may take a long time for that to happen.”

West, however, added that the college has influence of its own.

“The college has resources to fight back with — pub­licity,” West said. “The college will get support from parts of the public, no matter who is president.”

Arnn said he did his research on the real estate business mogul. In Feb­ruary, he came across an op-ed in the Reno (Nev.) Gazette-Journal with Trump’s byline. In it, Trump calls for a pres­ident to rein in the federal government.

“The United States of America is a land of laws, and Amer­icans value the rule of law above all,” Trump said in the article. “Why, then, has our Con­gress allowed the pres­ident and the exec­utive branch to take on near-dic­ta­torial power? How is it that we have a pres­ident who will not enforce some laws and who encourages faceless, nameless bureau­crats to manage public lands as if the mil­lions of acres were owned by agencies such as the Bureau of Land Man­agement and the Department of Energy?”

Arnn said the piece sur­prised him.

“I regard that speech as superb, and I read it, and I thought, ‘Wow. I wonder who wrote this,’” he said.

Arnn had stu­dents in his office look further into what Trump had said on the rule of law and the government’s own­ership of property to see if they could find any­thing uncon­sti­tu­tional from him on those sub­jects. They couldn’t, Arnn said.

“Over time, I’ve told people that, including people who are very against Donald Trump, and found them sur­prised,” Arnn said. “I was sur­prised. It looks to me it is what it is. The article, I think it’s really good. It gets to the heart of the matter, and then I find out it’s not the only thing he’s said on the matter by a long shot. I don’t know who wrote that article, but a lot of those things he’s said out of his own mouth in the context of a debate — more than one — responding to ques­tions. He seems to have absorbed the point.”

Ulti­mately, the real power rests in bureau­cratic agencies, West said. While the pres­ident has influence over the top offi­cials in those depart­ments, he said many civil ser­vants in those agencies don’t change with a new pres­ident, meaning a win for Trump or Clinton wouldn’t have made too much of a dif­ference con­cerning the policies the bureau­cracy enforces.

“A lot of these reg­u­latory policies have been in place for a long time and would take a long time to change them,” West said. “No matter who wins the election, I don’t expect a drastic change to take place in America in regard to the college.” 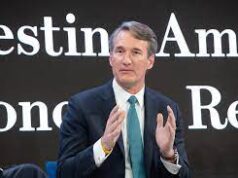