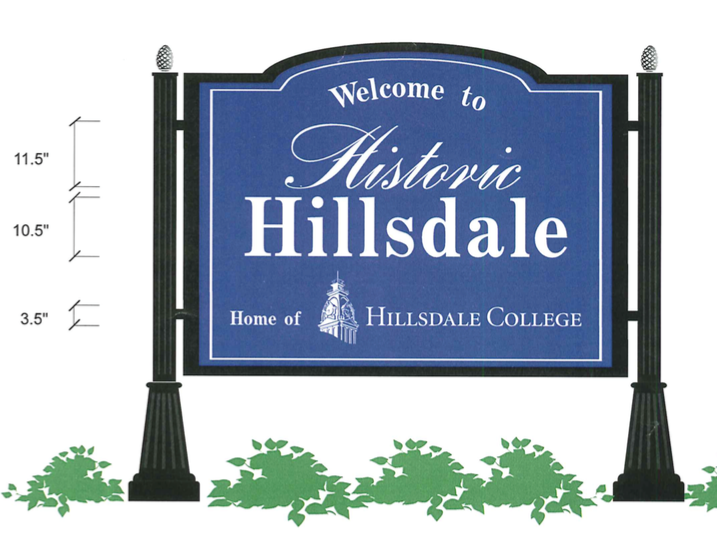 Wide­spread com­plaints about the Hillsdale welcome signs posted on the edges of town caused the city council to reopen public debate about the town’s motto at the Nov. 7 meeting. City Manager David Mackie said he has received neg­ative com­ments about the signs’ size, vis­i­bility from the road, and their content.

“I have a hard time seeing the new signs — they are small. I think they’re nice looking signs, but they’re not very big and they’re not lit up very well,” Hillsdale res­ident Dennis Wain­scott said. “They also do blend in with the back­ground greenery.”

Wain­scott also admitted to being legally blind, but others shared his con­cerns. Coun­cilman Bruce Sharp, who first brought up the issue of size at an Oct. 3 meeting, said the signs’ vis­i­bility has been a problem for him, too.

To appease everyone upset about the new signs, Coun­cilman Adam Stockford expanded on a sug­gestion made by Coun­cilman William Mor­rissey several weeks ago for a citizen-run contest for a new unof­ficial motto for the town. Stockford said he wants to show the people of Hillsdale that the city council cares about their con­cerns and wants to encourage them to par­tic­ipate in local gov­ernment

“Everyone will be allowed some input,” he said. “We’re working with the local press — we’ll run a contest, the com­mittee will receive all the slogans and then pick the best two. And then we put those two to vote and include ‘It’s the people,’ on the ballot too so res­i­dents have a chance to keep the old slogan.”

Stockford said it was important that the people take this task upon them­selves.

“The com­mittee needs to be com­posed of cit­izens — we have three vol­un­teers now, but we need more,” he said.

Stockford credited Hillsdale res­ident Penny Swan as being the driving force behind the idea for a new town motto. Swan has been advo­cating for the city council to allow the cit­izens of Hillsdale to come up with a new motto ever since the city announced the new “Home of Hillsdale College” signs in Sep­tember.

“I’d love to see “it’s the people” back, but if we could come up with a new slogan that would be great,” Swan said. “I’m open to any­thing — I’d just like to see some­thing with us people other than the college acknowl­edged.”

Should cit­izens succeed to form a com­mittee like the one Stockford laid out, it would hold no official power to give the City of Hillsdale an official motto or a new welcome sign. It also would not have the power to place any addi­tional signs near the ones already posted on the side of the road without first getting approval from the city council.

Coun­cilman Matt Bell said although he believes cit­izens should take an interest in their local gov­ernment by forming com­mittees like the one Stockford pro­posed, it is important that they follow legal pro­cedure in these sorts of issues.

“I think it’s good that cit­izens pick up the ball and do things on their own,” he said. “We just need to be sure that we stay within the pro­vi­sions of our charter as to who has the power to do what. If private cit­izens want to put up their own signs, they have to come to city council to get the per­mission to do it.”

Ashley Signor, vice pres­ident of welding company Liquid Metal Custom Cre­ations, said she and her husband would be inter­ested in pos­sibly building a new sign. Signor said the town of Hillsdale has a rich history that does not just include the college and the signs should reflect that.

“In my opinion, many more things should be added to the sign to reflect Hillsdale and its roots, including the indus­trial parts of Hillsdale,” she said.

Until someone forms a com­mittee to give Hillsdale a new unof­ficial motto, dif­ferent sug­ges­tions are in play to make the current signs more visible. Several res­i­dents sug­gested lighting. Mackie said in a con­ver­sation with Hillsdale Chief Admin­is­trative Officer Rich Péwé, Péwé had raised the pos­si­bility of building bigger signs with a more legible blue color scheme.

Coun­cilman Bill Zeiser said he hopes the con­tro­versy sur­rounding the signs will even­tually have pos­itive effects and get more people involved in local gov­ernment.

“I think we have a problem that a lot of cities have, and that’s a lack of citizen input,” he said. “My hope is that this idea will help bring more people into par­tic­i­pating in gov­ernment. I think that’s more important than whatever ends up hap­pening with the sign.”