The city of Hillsdale’s backup gen­er­ators have been out of service for the past four years, but in two months they will be com­pletely upgraded with newly-installed cooling towers. Total repairs — which began in 2015 — cost more than $470,000, funded by the Board of Public Util­ities’ budget.

Assistant Director Chris McArthur said the BPU chose to restore the gen­er­ators because the Mid­con­tinent Inde­pendent System Operator will provide the BPU with income based on how often the gen­er­ators are used during the year.

“Once a year MISO pays us money back to have those gen­er­ators available in case there’s an issue with the power on the grid,” McArthur said. “But we are not required to have backup power. The gen­er­ators are for lia­bility pur­poses.”

Hillsdale is a member of the Michigan South Central Power Agency, which is located in Litch­field and also pro­vides elec­tricity to the vil­lages of Clinton and Union City, and the cities of Cold­water and Mar­shall.

The MSCPA pro­vides energy for Hillsdale on a daily basis and charges the city per megawatt based on the MISO Energy Market. The price of energy fluc­tuates hourly, so the price sky­rockets during extreme weather con­di­tions, including on the hottest and coldest days of the year. McArthur said when the price of energy rises above $70 per megawatt, the city of Hillsdale uses its backup gen­er­ators for power to save money. Hillsdale uses its gen­er­ators about 10 to 12 days out of the year.

“It’s all about economies of scale,” said Glen White, MSCPA general manager. “We make sure the city of Hillsdale has all the energy it needs.”

Hillsdale joined the MSCPA when it was founded in 1982 as part of a joint effort for the five com­mu­nities to save money on elec­tricity, White said.

“If the grid went down, Hillsdale would be able to provide for some of its needs with its gen­er­ators,” White said.

In the past the Hillsdale gen­er­ators were cooled with water drawn from Baw Beese Lake. After cooling, the water was dumped back into the lake according to Hillsdale’s Department of Envi­ron­mental Quality non­contact cooling water permit.

McArthur said the BPU will finish installing the towers in approx­i­mately two months. 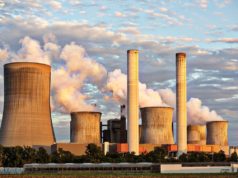 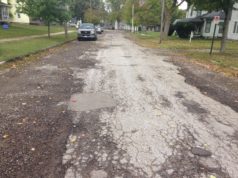 BPU in need of more funding to complete road project