Jour­nalist Sam Quinones has free­lanced for National Geo­graphic, Pacific Standard Mag­azine, The New York Times, Los Angeles Mag­azine, and more. He spent 10 years reporting in Mexico and is the author of “Dreamland: The True Tale of America’s Opiate Addiction.” In attempting to dis­cover how and why heroin became so prevalent in states such as Ohio and West Vir­ginia, Quinones came across a city in Mexico in which people “sold heroin like pizza” to Amer­icans. Further inves­ti­gation showed him the bigger problem: how painkillers and the increasing deter­mi­nation to feel no pain has led to a rising number of heroin addic­tions, over­doses, and deaths. Quinones spoke at Hillsdale College on Monday for the Dow Jour­nalism Program.

What was your first big feature story in Mexico?

I began hanging out with a street gang in the town of Zamora, Michoacam. That was a story of a bunch of kids, two of whom had gone north to L.A. They didn’t have a lot of money around, not like the gangs. What they did have was this gang affil­i­ation. They started a gang called West Side Kansas Tree. It wasn’t a crime story; it was a culture story about how people wanted to be a part of the American culture in one way or another, and if they couldn’t go, adopting a street gang seemed like a good idea. I realized that this was a story I could tell. It was more than a 100-word news story. I think I even­tually ran it as a 6,000-word news story.

How did you come across the idea for your book, “Dreamland: The true tale of America’s Opiate Epidemic?”

They were selling heroin in areas I didn’t asso­ciate with heroin: Southern Ohio, West Vir­ginia, and North Car­olina. I wanted to know why would there be any market for heroin in West Vir­ginia. The more I asked people, they all said they all started with pain killers. No one I talked to knew of a heroin addict that did not start first with pain pills.

How did doctors respond to your book?

A lot would talk to me about the pres­sures they were under, that patients would demand these things, and they would not respond well when they said, “Part of your pain problem is due to the fact that you’re obese or that you smoke or that you’re not doing nearly enough exercise or that you eat this awful food that is adver­tised on the T.V.” Also, there was this new con­ven­tional wisdom that these pills were now non-addictive with no ceiling on dose. The point is that there were all these pres­sures on doctors to go this way eco­nom­i­cally, cul­turally, and legally because the patients were in pain and the patients wanted these pills. All of these things played a role, but they all get down to the fun­da­mental thing that people don’t want pain; they’re afraid of pain.

What do you think are some of the con­se­quences of this problem?

We have jails that are now full, treatment centers with month-long waiting lists. We have courts that are packed with drug addicts who never were drug addicts before; we have people dying unnec­es­sarily of opiate over­doses. The worst effect is the com­plete destruction of fam­ilies that goes on. Everyone who has an addict in the family is ter­rified of late night phone calls. We have taken up hun­dreds of thou­sands — if not mil­lions— of people who could be con­tributing to society, and they become slaves.

You said you weren’t expecting your book to be this suc­cessful. Why do you think it was?

These people all across the country knew this was the truth, knew this was hap­pening, and yet everyone was quiet about it because most of the parents of the kids who were dying were raised in the ’70s when they saw heroin as the scurviest, back-alley drug. Now their kids were addicted to it, and the last thing they wanted people to know was why their kid really died. With this book coming out, it allowed everyone to see their own story in print. There was this critical mass that reached about that time. It became an issue that everyone needed to talk about. 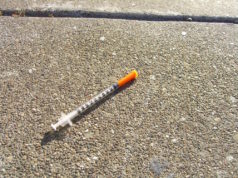