“I know those graves don’t move, but I sure as heck have trouble finding them from year to year,” she said.

According to stu­dents, however, her Hal­loween cemetery tours are nothing but a treat.

Almost annually, Moore leads a group of stu­dents, faculty and staff, and com­munity members on an illus­trative tour vis­iting 18 tombs in the 157-year-old graveyard at North West and West Mont­gomery streets. This year, she’s holding one Monday from 3:30 – 5 p.m. The group will meet in the Dow Lead­ership Center’s parking lot before stepping back in time to the early years of the college.

Moore has led about eight tours in more than 10 years, holding one only when a group or indi­vidual requests it. Her tra­dition of vis­iting ceme­teries, however, extends further back than that.

Growing up, Moore visited her grand­mother in Michigan City, Indiana, 35 minutes from her hometown of Buchanan, Michigan. Her family would grab a bite to eat for lunch and then go to the graves of her mother’s family to honor and remember them, she said. Her grand­mother would look at the dates to cal­culate the age at which the people buried there died.

“We always did that, visit the cemetery,” Moore said. “I don’t think it’s that common, but it’s some­thing we always did.”

She said she would even­tually develop an interest in history and genealogy, as well. In 1998, she took over the college’s archives from Pro­fessor Emeritus Jerry Fallon.

She said she learned of the local people buried in Oak Grove with con­nec­tions to the college — stu­dents, faculty, admin­is­trators, board members, and donors.

“It dawned on me, in the early years, there was so much local involvement in the college,” Moore said. “I thought it would be inter­esting to do a kind of college tour.”

Using a 1970s book with a map labeling people in the cemetery, Moore selected some indi­viduals she knew had inter­esting stories and created a route to walk by their final resting places.

She also com­piled photos of many of the people she dis­cusses to make the tour illus­trative.

“They become more real, I think,” she said.

Several stories come from those with familiar names, like Mauck, Koon, and Slayton. Junior Anna Zemaitaitis said she thought it was neat to learn their his­tories.

“You live in the dorms, and you see the names, and you learn some­thing about the people who built the school,” Zemaitaitis said. “We’re sur­rounded by these names anyway. It’s nice to know who it was.”

“There’s probably no one better to do the tour than her,” Egger said.

The tour has mostly remained con­sistent, but when Moore learns some­thing inter­esting about a new person on the route, she will add that story to her reper­toire.

“For­tu­nately for me, it doesn’t have to change,” she said. “New stu­dents are always coming in and can hear the same old stories.”

Some of her favorites are about past stu­dents who aren’t much dif­ferent than those attending Hillsdale today, she said. Her favorite to tell is how secret soci­eties led to the estab­lishment of fra­ter­nities on campus after the faculty had banned them, Moore said.

She said she also likes dis­cussing the lit­erary soci­eties — pre­ludes to clubs that hold lec­tures, dis­cus­sions, and debates on various topics today.

“Stu­dents were more closely con­nected to their lit­erary society than even the college,” Moore said. “They illus­trate the lifelong friend­ships stu­dents still feel at college. They cer­tainly did in the early days, as well.”

But what is most note­worthy is the amount of support the college had from the sur­rounding com­munity in its early days, Moore said. Before becoming nationally known, many Hillsdale sup­porters, admin­is­trators, and board members came from the area.

“People talk about the dis­connect between the town and gown, and I guess it shows that it wasn’t always that way,” Moore said. “There were very many times in the early years the college wouldn’t have made it without the sac­rifice of the people buried there. I think it’s fitting the stu­dents should acknowledge their grat­itude to those people that made this insti­tution pos­sible.”

Egger said learning about the community’s con­nection with the college altered her per­spective of her school.

“The sup­porters weren’t some­where across the country,” Egger said. “They lived right here and helped build the school.”

Moore said she now knows people buried in the cemetery. Some are related to the college and others are not. The stories of those they rest among, however, are worth telling, she said.

“There’s a saying that no one ever actually dies until the last person who remembers them is gone,” Moore said. “I think that’s one way we’re keeping those indi­viduals alive on campus and acknowl­edging the great debt the college owes them.” 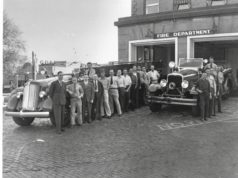 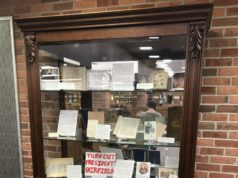 Hillsdale’s literary societies: ‘Infused into everything we do’