When Repub­lican Rep. Eric Leutheuser talks political phi­losophy, he uses a trinity of insti­tu­tions as his guiding prin­ciples in Michigan’s House of Rep­re­sen­ta­tives.

“Family, church, and local com­munity support American civil life when they are suc­cessful,” Leutheuser said. “When those insti­tu­tions are under attack, our society wobbles. Local com­mu­nities are weakened all the time when federal and state insti­tu­tions take more and more control.”

On Nov. 8, Leutheuser will seek a second term as the state rep­re­sen­tative for Dis­trict 58, which includes Hillsdale and Branch County. He faces Democrat Mary Hamaty.

A native Michi­gander, Leutheuser grew up in Hillsdale before grad­u­ating from Hillsdale College in 1982 with a bachelor’s degree in political science. He married a fellow graduate, the daughter of now retired Hillsdale Pro­fessor of History John Willson, and raised three daughters, who all attended Hillsdale Academy and Hillsdale College.

His ties to the area he rep­re­sents aren’t simply per­sonal, though — Leutheuser recently sold the family-owned car deal­ership, Leutheuser Motors, Inc., he worked at for 30 years.

“Having a job day in and day out where I got together with people, lis­tened, and tried to be helpful was great training for my job as a rep­re­sen­tative,” Leutheuser said.

After fol­lowing his father into business, Leutheuser also took cues from his family when he made the decision to dive into the world of local pol­itics. His grand­father, a first-gen­er­ation German immi­grant, served as post­master in Som­erset, Michigan, and his father, Paul Leutheuser, served as a two-time mayor of Hillsdale in 1966 and 1967.

Recalling a slogan he’d heard from a mentor of his college days, Leutheuser said he decided to run for office because his time to learn and his time to earn had passed, and he knew it was time to serve.

In 2014, Leutheuser won a spot in the House with 71.5 percent of votes against Democrat Amaryllis Thomas.

“I probably won because my dad was a good dealer and treated people well,” Leutheuser said. “People looked at the list and said ‘yeah I trust him, he’s a good busi­nessman.’”

During his 2014 cam­paign, Leutheuser expanded upon his well-estab­lished name, knocking on doors all over Hillsdale and Branch County.

“When you’re running at this level, the race is intimate,” Leutheuser said. “There’s no focus group. It’s just belly-to-belly, face-to-face on someone’s doorstep.”

Leutheuser said his greatest accom­plishment during his first two years in the House was his spon­sorship on a bill sup­porting faith-based adoption.

“It goes back to the big three,” he said. “Family, church, and local com­munity.”

This bill pro­tects private faith-based adoption agencies from policies forcing them to give children to unmarried or homo­sexual couples who violate their reli­gious beliefs.

“The state has made sig­nif­icant progress in finding more forever homes for Michigan kids in recent years, and that wouldn’t be pos­sible without the public-private part­ner­ships that facil­itate the adoption process,” Gov. Rick Snyder said after signing the bill into law last year.

But that was last term. Leutheuser is back to cam­paigning for reelection, and one project sits at the top of the agenda for his next term — reforming Michigan’s auto­mobile insurance.

Michigan law requires drivers to buy no-fault insurance, which covers medical expenses, wage loss ben­efits, replacement ser­vices, and the damage to others’ property, according to the state’s Department of Insurance and Financial Ser­vices.

No-fault insurance pays a monthly maximum of $5,398 to fam­ilies of those injured or killed in auto acci­dents, and pro­vides a maximum of $20 a day to pay for “routine household ser­vices which injured persons are no longer able to provide for them­selves or their fam­ilies,” according to the DIFS. They will also provide up to $1 million in com­pen­sation for third party property damaged in acci­dents.

With cov­erage like this, Michigan drivers get big bills. According to carinsurance.com, drivers in Detroit, Michigan, pay an average of $5,109 a year, the highest annual rate in the U.S.

Leutheuser said he wants Michigan to give its drivers the option of less extensive and less expensive cov­erage.

“We need to give people a choice,” he said.

Should Leutheuser rep­resent Hillsdale County in the next two terms, he said he plans to remain active in local pol­itics after his third term.

“People are trying to do the right thing out there,” he said. “The state should not get in the way — it should help them.” 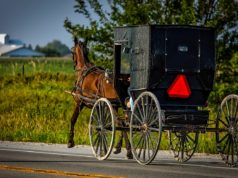