This is the pre­vailing message from Roy Finch, co-owner of the Hillsdale Brewing Company, who started the opening process two years ago.

Now, after countless set­backs and stum­bling blocks, Finch says he is “cau­tiously opti­mistic” about a spring grand opening for the restaurant and micro­brewery, which is housed in the old hotel at 25 Hillsdale St.

“There is no “how to open a business in Hillsdale,” Felicia Finch, Roy Finch’s wife and co-owner of the business, said.

The set­backs to which Finch is referring to include the loss of the deed to the property, resulting in a nine-month long court process; the need for new plumbing and HVAC systems; replacement of ceilings; and, most recently, a broken sewer pipe under what will be the new dri­veway and parking lot.

“You get to the point where it’s like, ‘what could pos­sibly happen now?’” Roy Finch said.

Despite all of these issues, and the apparent lack of headway on the outside of the building, Roy Finch said they have made tremendous progress.

“Almost all of the big stuff is done,” he said. “We have to have the new elec­trical run, but after that, it’s all cos­metic.”

Besides the elec­trical work, the other remaining big project is the com­pletion of the dri­veway and parking lot, which must comply with the stan­dards of the federal Amer­icans with Dis­abil­ities Act. The project, however, has long been delayed by the broken sewer line—a line so old, the city doesn’t even have it mapped. This means a camera must be run through the line to just figure out where it con­nects to the main pipeline.

For the Finches, seeing the brewery finally open is about receiving a return on their financial investment, as well as edi­fi­cation for their hard work.

“We have a lot of time and money invested in this. It is going to happen, no matter what,” he said. “We have worked too hard to have it not open.”

When Roy Finch says they have worked hard, he means it. Since April, the Finches have each spent between 12 and 20 hours per week working on the building after their day jobs wrap up.

“We’re proud of it,” Felicia Finch said. “We’ve built so much of this.”

Roy Finch works at Met­aldyne Per­for­mance Group in Litch­field, and Felicia Finch is an occu­pa­tional ther­apist at Genesis Healthcare in Spring Arbor.

The couple said the 12 – 20 weekly hours only rep­resent the time they spend at the bar during the working week, and doesn’t include the vacation time and days off they have spent scraping, painting, and ham­mering.

Cinda Conant is a co-owner alongside the Finches. The three of them together own Happy Pants LLC, with Kevin Conant — Owner of Here’s to you, Pub & Grub — working as the general manager.

While the brewery is still months from opening, Roy Finch said the process of brewing and testing beers and wines is well underway.

Upon opening, the brewery will feature eight taps. Five of these will be con­sis­tently stocked with some of their favorite and most-popular beers, while the other three will rotate between dif­ferent beers, depending on the season. Roy Finch added that patrons can look forward to more adven­turous beers, including a jalapeno IPA, on top of the more main­stream style micro­brews.

Every­thing alco­holic that the brewery is planning on serving will be made in-house. Hillsdale Brewing Company will also feature a full-service restaurant, which will serve pizzas, sand­wiches, soups, salads, and more.

Felicia Finch said she hopes having the restaurant will allow the brewery to be viewed as more than just another bar in town.

“Even if people aren’t here to drink, we want them here to eat,” she said.

The dream for the Finches is not to become mil­lion­aires from the brewery. Instead, they hope to be able to work the brewery as their full-time jobs, which would allow them to “take a day off for school activ­ities,” according to Felicia Finch.

A large part of their success will be knowing their clientele and fun­neling in local patrons, as well as stu­dents from the college.

Hillsdale College pro­fessor Dwight Lindley said he believes there is a lot of excitement about the opening of the brewery.

“I think there is def­i­nitely a general sense of expec­ta­tions,” he said. “There are a lot of people here who like good beer, and also a lot of people who like the idea of keeping their business as local as pos­sible.”

Lindley said he and other members of the Hillsdale college faculty cer­tainly plan on patron­izing the estab­lishment once it gets up and running.

To those that doubt that this will ever become a reality, Finch keeps the message simple. 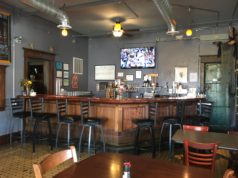