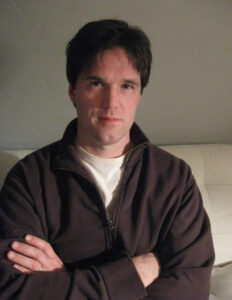 Every time stu­dents or alumni open their copies of “Imprimis” or “Hillsdale” mag­azine, External Affairs grabs both their attention and their mind’s eye.

This April, Arthur Donley took over the position of Art Director for External Affairs, the office that con­trols pub­li­ca­tions sent out from Hillsdale College. Focusing on the design and layout for lit­er­ature pub­lished, Donley brings fresh eyes and cre­ativity to the department and to campus as a whole.

“Any­thing that is outward facing to the public, External Affairs has the final say,” Donley said. “We want to be con­cerned that the message that is being pre­sented is the same message.”

His arrival to Hillsdale College was due to the influence of John Miller, pro­fessor and director of the Dow Jour­nalism Program.

“I was reading ‘National Review’ online,” Donley said. “John Miller writes blogs and quotes in the corner and I just hap­pened to see that there was the shortest little thing that said, ‘Hillsdale needs an art director.’ That is all he wrote and that’s why I’m here.”

Elena Creed ’18 has been working in External Affairs as a pho­tog­rapher for the past two years. In May, she started working directly with Donley.

“He is really great,” Creed said. “He is very upbeat and very excited and pas­sionate about his work, but he’s also super helpful. He is more than willing to set aside his own work and explain things to me and show me what to do.”

Don­ley’s artistic career took off while he was in college at the Uni­versity of Dayton in Dayton, Ohio. Orig­i­nally signed up by part of the Reserve Officers’ Training Corps program, he enrolled in an anatomy drawing class, where an art instructor noticed his natural talent, rec­om­mending him to the art program. He left ROTC and started in the com­mercial arts, what is now graphic design. Donley grad­uated from Northwest Mis­souri State with a BFA with emphasis on graphic design.

His arrival to Hillsdale comes with a wealth of expe­rience and breadth of exposure.

But that isn’t to say that this new job is easy.

“The dif­ference is, here there is only one person,” Donley said. “There, we had four or five art directors, six pro­duction artists, three retouchers. So in terms of that, there’s more like we do every­thing here and that’s why we have student workers.”

After doing some design work for Career Ser­vices, Jared Eckert ’17 got involved with art in External Affairs.

“Its funny — I have never taken a graphic design course, but I like it as a tech­nical skill,” Eckert said. “As a phi­losophy major, I kinda need a tech­nical skill to some degree. I need some­thing to be a little bit more prac­ti­cally grounded. This job gives me the oppor­tunity to pursue that if I want.”

The job has given him an outlet for his cre­ativity as well as expe­ri­ences like Eckert’s summer project, while working alongside Donley, that was fea­tured at the beginning of the school year: “The Mentor,” which is a com­pi­lation of campus activ­ities for freshmen and new stu­dents to get informed and involved in activ­ities on campus.

“I really love his approach in that he under­stands what it takes to have that insti­tu­tional look of Hillsdale, and how to capture that and stay within the guide­lines,” Eckert said. “But he also likes to have some fun. He doesn’t mind being cre­ative and he under­stands that to be appealing, you have to warrant cre­ative aspects even to things that might appear boring.”

Moving forward in cre­ativity and design, Donley will con­tinue working alongside the mission and look of Hillsdale College.

“I don’t really know if any­thing will change,” Donley said. “But each thing that I get involved with, that I touch, I am hoping to make the design of it better. That is the goal I made for myself.”

Future projects may include a more-user friendly campus map, tying in the geog­raphy of campus as well as Donley’s cre­ative touch.

“The idea that being con­ser­v­ative doesn’t mean that you have to be boring,” Donley said. “You can do some really cool stuff.”