The Col­legian is the ninth best college news­paper in the United States, according to a list released last week by Princeton Review.

“The ranking is a tribute to the hard work and excellent jour­nalism of our stu­dents, past and present,” said John Miller, director of the Dow Jour­nalism Program at Hillsdale.

Based on surveys of stu­dents across the country, the Princeton Review ranks col­leges in 62 cat­e­gories, pub­lishing the top 20 in each. Hillsdale College placed in seven of the lists, including, for the first time, Best College News­paper.

“All the credit for this recog­nition goes to our excellent jour­nalism stu­dents, who have really improved the quality of The Col­legian over the past few years,” said Maria Servold, assistant director of the Dow Jour­nalism Program and Col­legian adviser. “I’m also grateful to our readers, who are respon­sible for our placement.”

Since the Princeton Review began its rankings in 1992, it has asked stu­dents to evaluate their school’s news­paper, Princeton Review spokes­woman Amy Briskin said. For the 2017 rankings, stu­dents sur­veyed at various times throughout the aca­demic year responded to the question “How do you rate your campus news­paper?”

Senior Shayna Fields said she reads The Col­legian nearly every week to know what’s hap­pening on campus and in the city.

“The Col­legian does a great job of bringing all aspects of the com­munity to our attention,” Fields said. “It’s nice to see Hillsdale’s per­spective about what’s going on in the world. I get my world news from other media outlets, but it’s great to see what other stu­dents or even my friends are saying about it in The Col­legian.”

The news gar­nered national attention with shoutouts from Kim­berley Strassel, columnist for The Wall Street Journal and former Eugene C. Pulliam Vis­iting Fellow in Jour­nalism at Hillsdale, on Twitter and radio talk-show host Rush Lim­baugh on the air.

Princeton Review ranked Hillsdale in its best 381 col­leges and as a best Mid­western insti­tution. The college was also No. 1 for Future Rotarians and Daughters of the American Rev­o­lution, No. 5 for most reli­gious stu­dents, No. 6 for Pro­fessors Get High Marks, No. 7 for most con­ser­v­ative stu­dents, No. 12 for the least amount of mar­i­juana use, No. 14 for most polit­i­cally active stu­dents, No. 15 for stu­dents most engaged in com­munity service, and No. 19 in the Stone-Cold Sober Schools cat­egory. It was also No. 14 for College City Gets Low Marks and No. 11 for LGBTQ-Unfriendly.

Hillsdale’s admis­sions office does use college rankings, like those from the Princeton Review, in its mate­rials. Senior Director of Admis­sions Zach Miller said The Collegian’s recog­nition gives more cred­i­bility to the college’s assertion that its jour­nalism program is great.

“We’ve always thought it was a world-class col­le­giate paper, and now we just have more proof to that from a very rep­utable third party,” Zach Miller said. “We’re very excited about that and will con­tinue to market it and also con­tinue to talk about this whenever we can.”

Princeton Review ranks Hillsdale as one of nation’s best colleges 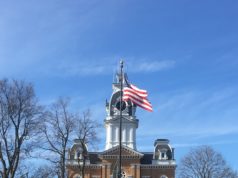 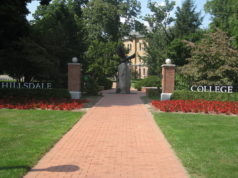