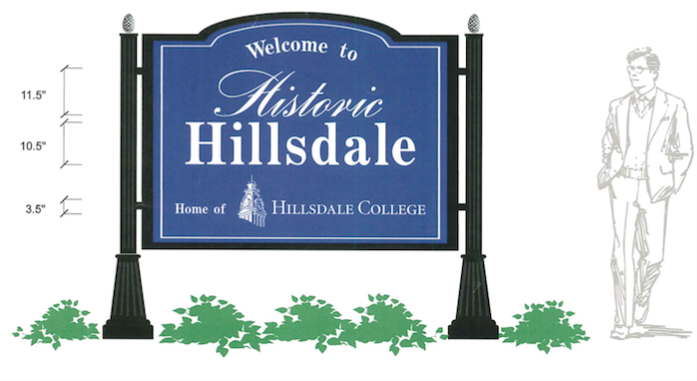 When trav­elers on M‑99 cross the Hillsdale city limits this fall, they will no longer be wel­comed by the infamous “It’s the people” sign.

This fall, as a result of two years’ worth of planning with the city and full funding from the college, the city will install two new welcome signs on M‑99 that read “Welcome to His­toric Hillsdale: Home of Hillsdale College.”

“We want to have some­thing that iden­tifies what stands out in the town,” said Chief Admin­is­trative Officer Richard Péwé. “In my opinion, most people would say it’s the college.”

“It’s The People” has been the unof­ficial city slogan since it was placed on the sign more than 20 years ago. While the phrase has become com­mon­place among stu­dents and locals alike, college and city offi­cials believe it is time for a change.

In January of 2014, the Hillsdale College admin­is­tration approached the city council with the pro­posal. The college offered to pay for the new signs and agreed to work with the city manager and offi­cials to come up with a suitable design.

While the final cost will not be figured until they are installed, Péwé esti­mated the cost of the signs will come out to around $8,000.

According to Hillsdale Zoning Admin­is­trator Alan Beeker, the city was eager to take the college up on its offer to redesign the existing signs.

“Hillsdale was willing to foot the bill, and we saw it as a great oppor­tunity,” Beeker said. “It’s an oppor­tunity for both the college and the town to cap­i­talize on the college’s brand.”

Updating the welcome signs has been a pet project of Beeker’s since he started working for the city, but Beeker said that, due to numerous state reg­u­la­tions and Michigan Department of Trans­portation guide­lines, they had to go through several redesigns over two years.

“Since I started here we’ve been working on a design,” Beeker said. “And we’ve finally agreed on a design with the college last month that also meets the MDOT require­ments. I am praying that this will finally be hap­pening.”

According to Péwé, MDOT had issues with phrasing in the college-focused city greeting. Labeling the city as his­toric opened up a mul­titude of reg­u­latory mea­sures, such as researching the his­toric points of the town.

MDOT also con­sidered “Home of Hillsdale College” an adver­tisement for a point of interest in the town. According to MDOT, that would require arrows directing trav­elers to campus and more changes in the design.

“We would have had them up already if it weren’t for MDOT,” Péwé said. “But the city has been in favor of it the whole time. We thought if the college could help them fund it, it would have expe­dited the issue. Appar­ently not.”

After several rounds of redesigns, MDOT finally signed off on the original choice last week, but they were not the only ones offering crit­icism for the signs.

Hillsdale res­i­dents are divided on the new design, with some saying they will miss the old slogan and think the college is taking too much own­ership in the city. Others believe it is time for the aged signs to be replaced and that a con­nection with the college is pos­itive.

“I’m glad to see the city taking the nec­essary steps to replace the current signs, which are in bad shape,” Hillsdale res­ident Samuel Fry said. “And with the college donating the signs, it’s a win-win sce­nario for the tax­payers.”

Others dis­agree. As for Hillsdale res­ident Penny Swan, she said she views the design as a dis­service to the town and pushes the city’s legacy aside to market the college.

“I think it is awesome that they are offering to pay for new signs for the city, but I think they should also have some­thing about our town on them,” Swan said. “I do have a huge issue with the college being the only thing on the signs. It’s an over­reach. Hillsdale is more than the college.”

Péwé believes the signs aren’t stepping on the city. He said he sees it as a symbol of the college’s appre­ci­ation for the city and a recog­nition of its future rela­tionship.

“If we do great things as a school then there are ben­efits for the town,” Péwé said. “But at the same time, we want the com­munity to know that we care a lot about the city and its amenities. There is a lot of pride, and we’ve come a long way together. These signs will be a product of our rela­tionship.”

Addi­tionally, the city is footing the bill for another sign on Arch Street, which will point to the Hillsdale Man­u­fac­turing Complex. The Arch Street sign will be part of a new way­point system throughout the city, with all signs bearing a similar, uniform design.

According to Beeker, once they are con­structed, the signs will greet trav­elers down M‑99 as early as the first week of Sep­tember.

“She is the ‘PhDog’”: the pets of the staff and faculty