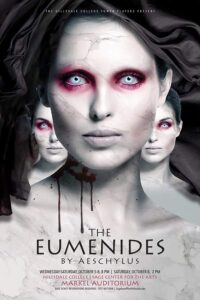 Hillsdale College’s Tower Players invite all stu­dents to audition this Wednesday and Thursday for this year’s fall pro­duction that will revive a nearly 2,500 year-old Greek theater tra­dition.

Written orig­i­nally by the ancient Greek play­wright Aeschylus in 458 B.C., Hillsdale College stu­dents and theater faculty will perform “The Eumenides.” Chairman of theater George Angell said he plans to stay true to the original and put on a pro­duction filled with authentic period mask-work and choral inter­ludes from mytho­logical crea­tures.

“I have wanted to do ‘The Eumenides’ for years, for lots of reasons,” Angell said. “It may seem odd to do the final part of a trilogy as a stand-alone pro­duction, but there are lots of fun and inter­esting things about it. We are keeping the play set in Greek times, though a kind of Greek that is fil­tered through our modern sen­si­bil­ities — a kind of animé Greek, if you will.”

The Eumenides fea­tures a dramatis per­sonae of well-known char­acters from Greek mythology, including Apollo, Clytemnestra, and Orestes, a cast that stu­dents will bring to life on stage during their early-October per­for­mances. But the lead role has already been filled by senior Dani Morey, who will take the stage as Athena to com­plete the require­ments for the final project of her theater major. Morey said she is both nervous and nos­talgic for her last fall theater pro­duction, but is excited to play the title role.

“I’m a bit nervous, because I’m a huge mythology nerd, espe­cially about ancient Greek stuff,” Morey said. “So I’m honored and intim­i­dated to get to bring Athena to life. I read the first two plays in the cycle in my freshman English class, so it’s also fitting to get to live out the last part during my last year here.”

“George’s pro­duc­tions are always exciting to be in,” Dignoti said. “His cre­ativity when setting the themes of his pro­duc­tions always allows for a lot of fun twists on clas­sical plays.”

While Morey said she is sad to wrap up her theater career this season, she is excited for audi­tions and for the Tower Players to find new and eager per­formers.

“Facebook just notified me that three years ago today I was audi­tioning for my first show here. It’s crazy. But good crazy,” Morey said. “I’ve had a lot of great oppor­tu­nities here, and I’m excited for the freshmen and under­classmen to get to step up and take over.”

Audi­tions begin at 6:30 p.m. this Wednesday and Thursday in the Quilhot Black Box at the Sage Center for the Arts.