Shake­speare in the Arboretum’s pro­duction of “Macbeth” opens with the bodies of sol­diers stretched out on the grass fol­lowing a battle.

Only one soldier remains alive to be rescued by his com­panions. Soon after, Macbeth, general of the Scottish king’s army, stumbles upon the Weird Sisters. The bent and old hags prophesy his rise to power. Macbeth is hor­rified by his own growing desire, afraid to think what he himself would do to be king.

Thus begins the story of a man’s struggle for dominion and his battle with con­science. Lady Macbeth, played by senior Kendall Karpack, counters her husband’s reluc­tance to assas­sinate his cousin the king, rejecting morality in a chilling prayer for cruelty and hardness of heart.

“I love it. It’s such a chal­lenge,” Karpack said of her role. “I did theater all throughout high­school, and I’d usually play romantic leads. I love broad­ening my acting horizons, so she’s def­i­nitely the most fun char­acter I have played.”

Sophomore Sarah Schutte por­trays Lady Macduff, gentle and motherly, as the antithesis of Lady Macbeth. In a scene during the second act, she gains the sym­pathy of the audience. Longing to see her exiled husband, she mourns that her son must live without a father. Her mono­logue exem­plifies the honest sim­plicity of her rela­tionship with her husband in con­trast with the scheming of the Mac­beths.

In a wrenching climax, Lady Macduff and her son are attacked by Macbeth’s men, and she dies bravely fighting to defend her family.

A grassy pavilion in the Slayton Arboretum serves as a stage, backed by firs and ever­green bushes. Peaceful and lovely, the natural setting proves a chal­lenge when con­sid­ering the dark mood of Shakespeare’s pro­duction. Macbeth’s lines fre­quently describe his inner struggle, cre­ating a mood that is tense and almost suf­fo­cating as it causes the audience to wait in sus­pense for the dis­aster that must follow his treach­erous actions.

fresh atmos­phere of the arboretum, but the directors chose to take advantage of this feature in their por­trayal.

“The arb is beau­tiful, so per­forming some­thing as dark as Macbeth is dif­ficult,” co-director senior Faith Liu said. “However, that’s what the play is about. Appear­ances can be deceiving. So we are playing on that theme.”

The script fea­tures mul­tiple double meanings. Liu and fellow director senior Daniel Negri drew on this theme when making artistic deci­sions. They cast actors to play both pro­tag­o­nists and antag­o­nists within the same per­for­mance, sug­gesting the potential for cor­ruption in all humans. The actors playing the Weird Sisters in the second act also play innocent char­acters in the first act. Freshman Molly Schutte, cast as a Weird Sister, praised Liu and Negri for their directing skills.

“It’s been inter­esting to watch Faith and Dan shape how we play our char­acters because they have a spe­cific vision for how they want us to portray them,” she said. “But they also give us freedom to think about what our char­acters are saying.”

The second act opens with a famous incan­tation of the Weird Sisters, “Double, double, toil and trouble,” pro­pelling the story at the same rapid pace as the first act, onward toward a tragic close.

The cast includes Joe Banovetz ’15 as Macbeth and senior Kendall Karpack as his dom­i­nating wife. Junior Austin Benson will play the honest Banquo, Senior Dominic Restuccia will portray Malcolm, and Shelby Ripley will take the role of Macduff. The cast, a majority of which are stu­dents, is joined by Assistant Pro­fessor of Pol­itics Adam Car­rington as King Duncan.

The pro­duction will stage two per­for­mances this weekend: one at 2 p.m. Sat­urday and the other at the same time on Sunday. In case of rain, the per­for­mances will be held in McNamara Rehearsal Hall at Howard Music Building. 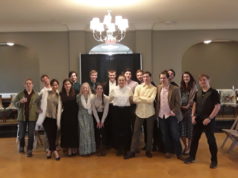 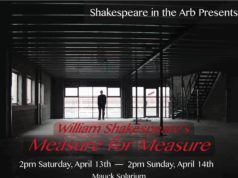 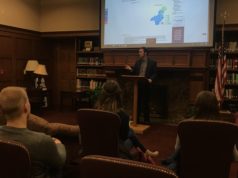