This semester’s choir concert fea­tures a rare com­ponent: a student com­poser and a student con­ductor.

Along with the rest of Chamber Choir, sophomore Jonathan Edelblut will sing his original com­po­sition “as is the sea mar­velous,” based on the e.e. cum­mings poem. Senior Faith Liu, a music and English double major, will conduct the Chamber Choir’s per­for­mance of “The Con­version of Saul.” The Hillsdale College Choir and Chamber Choir will perform their spring concert at 3 p.m. on Sunday, April 24 at College Baptist Church.

“Jonny did such a good job: and to think that someone my age could produce some­thing so excellent,” sophomore Mark Naida, who has been in Chamber Choir for three semesters, said. “And Faith just really knows what she’s doing. She’s taken a lot of con­ducting with Holleman, but she also does a dif­ferent thing and I think is able to bring out other things in us. It’s just a new per­spective on what a con­ductor should be doing, which is really nice.”

Music Department Chair James Holleman said he can’t remember ever including a student com­po­sition in a major per­for­mance, and he has only fea­tured one or two student con­ductors during his time at the college.

The Chamber Choir per­forms a capella, but the College Choir will be accom­panied by a reduced orchestra: senior Mikayla Brown on harp, Assistant Pro­fessor of Music Derek Stauff on organ, and Teacher of Music Stacey Jones on per­cussion.

Teacher of Music Debbi Wyse, who accom­panies the choir in rehearsals and has not missed a concert for 35 years, cannot be present this year because of a family com­mitment.

“I am so dis­ap­pointed to miss this concert,” Wyse said in an email, “because I have sung Bernstein’s ‘Chich­ester Psalms’ several times and I have always wanted our College Choir to perform that work.”

The song selec­tions do not follow a theme, Holleman said, but are chosen indi­vid­ually for quality and variety. One of the Chamber Choir’s pieces, Eric Whitacre’s “Alleluia,” was requested by some seniors.

“They’ve been bugging me for semesters to do this piece,” Holleman said.

According to tra­dition, seniors in both college and chamber choir will be pre­sented with a rose at the concert.

The concert, which is open to the public and does not require tickets, should be a fairly full house, according to Holleman.

Edelblut, who will be trans­ferring to Berklee College of Music this fall, said Hillsdale stu­dents express a real enthu­siasm for music.

“One of my favorite things about Hillsdale’s music department is the excitement that everybody has about music, about the idea of per­forming music,” he said. “And the real, true passion that everybody has for music regardless of their level of skill or com­pe­tency.” 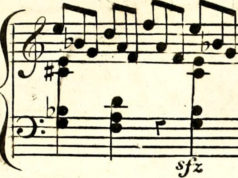 Liu and Lukich to perform at orchestra concert