In a long stretch of hallway lined with mats, sophomore Kirk Williams drills the members of his tum­bling class in backbend-walkovers in time to upbeat music, making cor­rec­tions and encour­aging them as they go.

Before his sophomore year, Williams, a three-time qual­ifier to junior nationals in gym­nastics, had never taught a tum­bling class before, let alone seven, in a studio of his own. Now, he works at Hillsdale’s Studio 55, teaching tum­bling (a  set of floor exer­cises in gym­nastics such as hand­stands, cart­wheels, and forward rolls) to girls and boys ranging from 5 to 14 years old.

“It’s been hectic, for the first time ever teaching,” Williams said. “I’ve had half of my classes double in size.”

Erin Reinker said once Williams joined the program, the studio began needing more mats to accom­modate growing class sizes. She attributed the growth of the program to Williams’ ability to diagnose the needs of the tum­blers and develop their skills.

“I came there, and they knew how to do certain things, but they were doing them improperly,” Williams said. “So, if they were ever to con­tinue to try and do tum­bling, it’d be more dif­ficult because they’d be con­tinuing to learn it wrong. It could actually hurt them in the future, pos­sibly.”

Wendi Graham, the studio’s cus­todian for six years, said she has seen Williams both inspire con­fi­dence in the tum­blers and become more self-con­fident as an instructor.

“I knew with his past and every­thing that he’d be overqual­ified to be an instructor here,” Graham said. “He’s going to be awesome for us.”

While Williams said he never antic­i­pated becoming a teacher, the com­munity and men­torship he’d expe­ri­enced in gym­nastics nat­u­rally equipped him for the job.

“It’s a thing that you learn in gym­nastics without even knowing it,” he said. “You learn how to ver­balize to younger kids because you’re always trying to give little kids pointers on how to do things better.”

Nev­er­theless, when he started teaching he still found he had to work to develop a more under­standable method of explaining new con­cepts.

“It’s not the same to try and describe to a gymnast what they need to be doing as to a tum­bling person who hasn’t had gym­nastic expe­rience,” he said. “I have to give it to them in examples that they know. It’s like starting from a clean slate as opposed to already knowing what those words mean.”

Instead of using gym­nastics lan­guage, such as remem­bering to have a “hollow body” when exe­cuting a forward tuck, he tries to use examples with which stu­dents would be familiar, like imi­tating a diving position. Along with adjusting his vocab­ulary, Williams said he has been working on a tem­plate of skills tum­blers in each level need to master in order to progress to the next level. When he first began teaching, no such system existed.

Williams enjoys the chal­lenge of teaching levels four and five, the upper levels, because he can walk into class, come up with a chal­lenging new sequence, and see if the girls can do it.

“I really do like teaching the little kids, they really do say the darnedest things,” he said.

While little kids may make him chuckle, the older girls bring out Williams’s inner sass. Since mostly girls take his classes, he said he has had to become more con­fident in han­dling their sass — by dishing it right back.

“Whatever they give you, you have to give it right back if you want their respect,” he said. “If they say ‘Your face looks stupid,’ you have to say, ‘So does yours, now do a kick-hand­stand-forward roll.’” 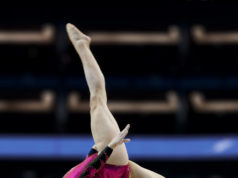 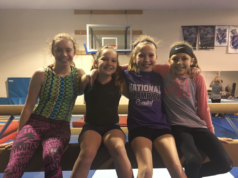