Stu­dents, alumni, and friends gather in the Searle Center Wednesday, Feb. 25 for a memorial in honor of “Saga” Steve Casai ’74.
Anders Kiledal | Collegian

One of Hillsdale College’s qui­etest char­acters left a pro­found impression on the lives he touched during his 35 years of working in its food service. Yet, “Saga” Stephen Casai ’74 almost didn’t realize it.

“We were his min­istry, and we should be thankful that we were members of his flock,” Pres­ident Larry Arnn said of Casai at his memorial service Wednesday.

It was Casai’s loyalty and con­sis­tency that so many have recalled fondly since his passing on Wednesday, Feb. 17. Just as Casai could always be counted on to trek between his home and work every day regardless of weather, because, as he joked, he was “too lazy to drive,” it seemed fitting that memorial attendees must trudge through a snow­storm to honor him. Although few knew Casai closely, stu­dents, staff, and alumni filled the Searle Center to honor him and his con­tri­bu­tions to the com­munity he embraced as his family.

Since Casai’s passing, his longtime friend Bud Vear said it has been like a “treasure hunt” going through his pos­ses­sions and puz­zling together the life of a person so many knew but no one really knew much about.

Casai grew up in a “small town near Detroit,” but when he was 10 years old, he developed Crohn’s Disease and spent a lot of time in the hos­pital, according to Vear, who spec­u­lated this con­tributed to much of Casai’s desire to keep his past private.

Casai grad­uated from Hillsdale College in 1974 as a “very good student,” according to Arnn, who said he looked up his student records and was impressed. Afterward, Casai attended Bethany Lutheran College in Min­nesota and Wis­consin Lutheran Sem­inary until 1980.

Casai’s grad­u­ation cer­emony pam­phlet showed that he was the only member of his class to defer his appointment at a parish, for unknown reasons, so he was never ordained. Instead, Casai returned to Hillsdale and worked as an usher for 11 years at the Dawn Theater and for the college, checking stu­dents in at the dining hall for the rest of his life.

“After all that edu­cation, he chose to come back here and check stu­dents in for meals,”Vear said. “That’s remarkable. It was such a simple task, but through that, he had an incredible impact.”

During his time at Hillsdale, Casai became known for small things: his cheerful smile; begrudg­ingly signing stu­dents in for meals when they forgot their tickets; superior ping pong skills; attending and inviting others to Right to Life events; writing articles for local pub­li­ca­tions; and attending a majority of the college’s fine arts events.

His presence on campus was surely humble, even meek, as Greg McLogan ’88 pointed out in his memorial remarks, but some­thing about him moved the hearts of most everyone he met.

Casai embodied “Christian traits and virtues that are seem­ingly in very rare com­modity these days, and we can learn a lot from looking back at Steve’s life of loyalty and ded­i­cated service,” McLogan said.

As evi­dence of his ded­i­cation to the college, the Col­legian staff wrote an edi­torial titled “A Sincere Pro­posal” in 2005 asking that the new cafe­teria in the soon-to-be-built Grewcock Student Union be named the “Stephen Casai Dining Hall.” For weeks afterward, stu­dents, staff, and alumni wrote letters voicing support for the idea.

Arnn recounted this story at the memorial. He explained that the stu­dents didn’t get their way, but they did get to design and ded­icate two plaques that hang inside the cafe­teria in Casai’s honor.

Casai always deflected any ques­tions about his per­sonal life and wasn’t known for having long con­ver­sa­tions despite his friend­liness. So it wasn’t with words that Casai impacted Hillsdale College so deeply but by his steadfast example of faith­fulness — to his religion, job, and college family.

After Casai was hos­pi­talized last Sep­tember, hun­dreds of alumni sent him well wishes included with their grat­itude for how one of his small actions or smiles affected their college experience.

In a letter Casai dic­tated to Heather Tritcha ’98, he said the hardest part of being ill and  reflecting on his life was “to look back at my life and wonder what more I could have done…Did I do enough? I felt in my heart that I might leave this world without having made a dif­ference. And then I started to hear from all of you.”

Wrapped in a prayer blanket handsewn and signed by stu­dents, Casai spent his last months sur­rounded by cards, flowers, and vis­itors from his Hillsdale family. Although he was com­pletely unre­sponsive during his last few weeks, stu­dents like senior Amanda Gehrke con­tinued to visit Casai as part of the GOAL program’s “Adopt-A-Grand­parent.”

“The last time I visited him, I read to him until he fell asleep, so I didn’t get to say goodbye exactly,” Gehrke said. “But it was perfect we didn’t speak because that was the way he was — to not speak but convey meaning in a deeper, spir­itual way.”

In March 1992, the Col­legian pub­lished a feature on Casai, which ended with Casai answering what he planned to do with his future.

“I don’t know how long I will stay at the cafe­teria,” Casai was quoted saying in the article.  “Right now, I have no plans to quit or move on. I take my life one day at a time, con­fident that my Lord Jesus Christ is with me, working all things for my good, as He guides me on the path that leads to eternal life in heaven.”

Casai’s path crossed those of many stu­dents along the way, and through his small actions during that journey he made an impact that cannot be described but is keenly felt.

“You did make a dif­ference,” Vear said, con­cluding his memorial remarks.

In addition to the plaques placed inside Knorr Dining Room, the college will per­ma­nently remember “Saga” Steve with a bird feeder placed near the flagpole at Knorr’s east end and a schol­arship set up in his name that Casai estab­lished before his death. 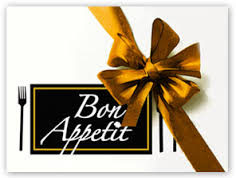 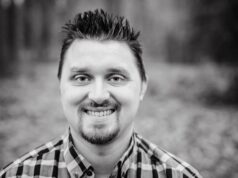 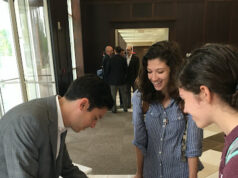