The craft is a tra­di­tional Scottish dance which was developed as early as 1054 A.D. when Malcolm Canmore, a Celtic prince, killed another chieftain, according to the Scottish Official Highland Dancing Asso­ci­ation.

“Taking his victim’s claymore and crossing it with his own on the ground, so making the sign of the cross, Malcolm Canmore danced over and around the naked blades with the ecstasy of victory,” the association’s website read.

The Sword Dance is still popular during com­pe­ti­tions today, but Plemmons leaves the swords at home and pri­marily works on teaching her stu­dents at Hillsdale the Highland Fling. She said she can’t remember the exact year she started at Hillsdale, but guessed she began about a decade ago.

But that was hardly the beginning of her Highland dance career. Her mother was born and raised in Scotland, and started teaching 2‑year-old Plemmons the craft. Plemmons per­formed for the first time at age 3, dancing in front of 1,000 people.

“And that was that,” Plemmons said.

She never stopped dancing. By age 11, she rep­re­sented the Midwest region in the national highland cham­pi­onships, and at age 14, she won her first of four con­sec­utive cham­pi­onships.

From there, she started teaching the art she loved and even­tually passed the mem­bership exam from the British Asso­ci­ation of Teachers of Dancing. Now, she teaches young aspiring pro­fes­sional dancers during the evenings at the Mittig School of Highland Dancing in Novi, Michigan, when not instructing the stu­dents of Hillsdale.

“It’s a cel­e­bration of my her­itage, and I want to spread my her­itage and my love of Highland dance to anybody who wants to learn,” Plemmons said.

Even though Hillsdale stu­dents typ­i­cally take the class recre­ationally — not to become masters of the art — Plemmons said she ben­efits just as much from teaching them as she does from teaching her more serious dancers.

“It’s actually refreshing,” Plemmons said. “It’s all in my per­spective. I get out of it what I want, and I choose to learn from them.”

Plemmons said she spends the classes intro­ducing basic tech­nique and def­i­n­i­tions of move­ments, which she then con­nects to form the dance. She also brings in the Scot

tish social dancing for a “dif­ferent flair” of the Scottish her­itage.

Over the years, she has gotten a wide variety of stu­dents, many with no dance expe­rience.

“I think they take it because it’s new and dif­ferent and they don’t know what to expect,” Plemmons said.

She said the class is very helpful for flex­i­bility and coor­di­nation because of how much “crossing over the body tech­nique” goes into the dance.

“You are using both sides of the body at the same time, which acti­vates your brain and your coor­di­nation,” Plemmons said. “You need to move your right arm and left foot. The coor­di­nation is the struggle for most stu­dents.”

Plemmons said that even though Hillsdale stu­dents aren’t starting young, she knows that com­mitted stu­dents could learn enough to compete or put on shows. In the past, when she was con­nected with the music department, she has had groups of stu­dents perform.

Senior Lucia Rothhaas is cur­rently in the class. She said the back­story as to how she ended up in the class is a bit embar­rassing.

“I thought Irish step­dancing and Highland dancing were the same thing,” Rothhaas said. “I grew up watching River­dancing and prac­ticing it on my kitchen floor.”

She wasn’t taking a physical edu­cation class or any classes “for fun,” so when a friend men­tioned she was taking it, Rothhaas decided she could do Irish dancing too. Rothhaas said she has no pre­vious dance expe­rience, but loves dancing.

“It’s kind of rig­orous and we only have one class per week to work on form and how to position our feet, and I have no back­ground in that,” Rothhaas said.

Right now, Plemmons only teaches a beginner class, but she has some stu­dents who have taken the class all four years at Hillsdale because they love it.

Senior Hannah Wolff took Scottish Country dance before coming to Hillsdale and wanted to con­tinue learning new types of dance, so Scottish Highland dancing seemed like a natural choice. She also knew the club asso­ciated with the class hosted ceilidhs, or informal Scottish country dances, during the school year. She’s taken the class since she was a freshman.

“It seemed like a great way to stay active, fulfill my PE credit, and have fun,” Wolff said in an email. “It’s nice to take a break from aca­d­emics and yet exercise another part of my brain: some of the dances are more com­pli­cated and def­i­nitely require mental exertion.”

Wolff said the four-step Highland Fling is like running a mile.

“Not only does it require incredible strength to jump for that long, but you must do so while keeping proper posture, pointing feet, exe­cuting turnout, and the dozens of other things Alison is con­stantly reminding us of,” Wolff said.

“She keeps me coming back,” Wolff said. “She is extremely down-to-earth, funny, and encour­aging. She always gives us a pep talk when we’re stressed during hell week, and she also holds us to a high standard for dancing. Alison is great to be around.”

She added that in the future she plans to keep dancing and bringing more people into the world of Scottish Dance.

“I just want people to know that I love Highland dancing and I am willing to work with and teach anybody who is willing to learn,” Plemmons said. “It’s not about being the absolute best, but enjoying the expe­rience and learning.” 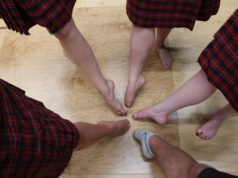