“Dorito Dogs” stars Pentzell as a grocery store manager shooing a trio of mis­chievous dogs trying to break in for a bag of Doritos. The com­mercial  was pro­duced for $1,000 and shot in Red­lands, California.

Jacob Chase, director and co-writer, and Travis Braun, co-pro­ducer and co-writer, will watch the Super Bowl, and the com­mer­cials, from a private suite along with the other finalists. They will all find out the winning com­mercial when it’s aired on national television.

The winning director will ring in $1 million, have the oppor­tunity to work with Zack Snyder — the director of “300,” “Man of Steel,” and the upcoming “Batman v. Superman: Dawn of Justice” film — and DC Comics, and Warner Bros. on an upcoming project, and have his or her com­mercial aired nationally during the big game.

This is the final year that Doritos will hold the contest, which is partly why Pentzell decided to audition.

“Over the years I do see these audi­tions for the Doritos com­mer­cials. A long time ago I might have sub­mitted to some,” Pentzell said. “This year, with it being the last year, I thought, ‘Why not?’ Dorito Dogs was the only one I sub­mitted to.”

Pentzell’s father, Dr. Raymond Pentzell, was the former head of the theatre and speech department at Hillsdale College. Chris, however, attended the Uni­versity of Michigan and now lives in Pasadena, Cal­i­fornia with his wife and three-year-old daughter.

Chase said Pentzell “knocked it out of the park” at his audition.

“We knew that he was our guy when he walked in,” Chase said. “There’s not much dia­logue, because it’s from the dog’s per­spective, but in audi­tions I wrote up some rough dia­logue and he just cracked us up. He was hilarious, he ad-libbed, and he had perfect look.”

The com­mercial fea­tured three rescue dogs. During the shoot, Pentzell had to interact with the dogs, a feat which he called both enjoyable and tricky.

“It was inter­esting,” he said. “There were some chal­lenges. Some of the easier shots were actually more chal­lenging. When I was shooing the dogs, they wouldn’t all run at the same speed. It was hard to get them running in a pack.”

Pentzell said that both Chase and Braun gave him some cre­ative liberty which made the shoot fun for him.

“They were very encour­aging in terms of improv,” Pentzell said. “They had the idea set, but they didn’t know exactly how it was going to happen so I could come up with a few ways of shooing the dogs out. For example, I asked “Do you guys have a broom?” I got to try a couple dif­ferent ways and that was fun.”

Neither Chase nor Braun had pre­vi­ously entered into contest, but Chase said he has always loved the Doritos com­mer­cials. A long-time dog-lover, Chase was inspired by his own little, white terrier, Miz, who he cast in the commercial.

“Def­i­nitely her being a part of my life was inspi­ra­tional, and I wanted to put her in the com­mercial,” Chase said. “In terms of the actual idea, I was thinking about when you’re outside of grocery store you see dogs waiting for their owners, I started won­dering what are they doing when we aren’t around. Maybe they’re breaking into a store to get some Doritos.”

Chase said that winning this com­mercial could be his “big break.”

“Having your com­mercial playing during the Super Bowl is the pin­nacle of any director’s career,” Chase said. “Getting that so early on would be great.”

Pentzell said he’s not sure where he will watch the Super Bowl, but he’s eager to know the results.

“It’s a national com­mercial, and it could air for two years if it wins. That’s a con­crete victory,” Pentzell said. “It’s very exciting. The most imme­diate thing is the prize money, and I get some of that, too.” 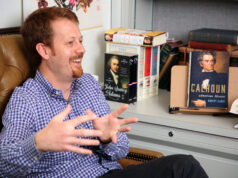