The Hillsdale College women’s cross-country team placed third with four All-Amer­icans at the NCAA Division II National Cham­pi­onship in Joplin, Mis­souri on Nov. 21.
After fin­ishing as runner-up at the national meet last season and being ranked as high as first in the nation this season, many members of the team were dis­ap­pointed with their finish imme­di­ately fol­lowing the race. They soon got over it.
“After we realized that no one felt good during the race and no one ran very well, we were like, ‘We were still third and we didn’t feel good, that is crazy,’” senior captain Emily Oren said. “I just think it speaks volumes to how far this program has come.”
Head dis­tance coach Joe Lynn was proud of how the Chargers fought during the race despite not feeling their best.
“It wasn’t nec­es­sarily the result we were looking for, as indi­viduals or from the whole team, but at the same time I thought we showed a lot of char­acter being able to run and place as well as we did despite how we felt.”
Lynn also men­tioned that sophomore Hannah McIntyre and freshman Ally Eads stepped up when their team needed them most. McIntyre fin­ished second on the team with a per­sonal best time of 21:01 en route to 20th place and All-American status.
“Last year getting second kind of felt like a fluke, just because I remember coach Joe shouting in the middle of the race that we were second and I thought he was kidding. But this year it was cool to be in that position where we were in it to win it,” senior Kristina Galat said.
The race went out fast from the gun and didn’t slow up. This sur­prised Oren who came in looking to poten­tially win the indi­vidual title, but didn’t quite have it in her to keep up with the blis­tering pace set on the day.
“I was ready for it to start that fast, but what I wasn’t ready for was how it didn’t slow down,” Oren said.
While Oren was only a second off her regional time, the winner, U‑Mary’s Alexis Zeis, ran an impressive 20:03 6K. Oren placed eighth.
Senior legacy captain Kate Royer said it didn’t really hit her that she was done with col­le­giate cross-country until about 10 minutes after she had fin­ished the race.
“It was kind of surreal,” Royer said. “You finish a race and you’re like, ‘Oh I’m done,’ then I’m like, ‘Oh, I’m done with my cross-country career.’”
Galat said the thing she will miss most about cross-country is being on a team.
“This year espe­cially was such a good year to end because the whole team was just so awesome,” Galat said.
Lynn knows how important the team’s three seniors — Galat, Oren, and Royer — have been to the program.
“Obvi­ously those three girls have been the cor­ner­stone and the spearhead of the program to the level we’re at now,” he said. “I’m proud to have had the oppor­tunity to coach them the last couple of years.”
While he is happy with how the women’s cross-country season went, Lynn is already looking forward to how the team can use their momentum in the indoor track season.
“I think we can use that to build off of for our indoor track season and into next year when we graduate a lot of lead­ership and a lot of talent from the program. At the same time, I think the younger girls now have seen how it’s done,” Lynn said. “A lot of pos­i­tives moving out of it, both into this upcoming track season and moving forward for those ath­letes who will be back next year.”
Oren is looking forward to indoor track season where she is reigning national champion in the 3K and 5K races.
“I did hate losing in cross-country,” she said. “I think indoor season is going to be fun because now we’re bringing the sprinters and everybody in and they’re all really, really tal­ented.”
Tomorrow Oren will be com­peting at the GVSU Holiday Open in the 3K in hopes of running under 9:33 and auto­mat­i­cally qual­i­fying for the indoor national meet. 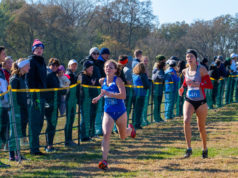 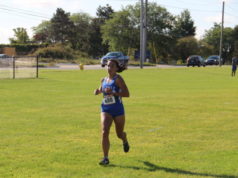 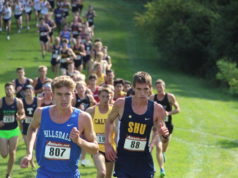