In its latest album, “Ancient Winds,” The Madeira takes lis­teners on a journey around the Mediter­ranean and shows that surf rock appeals to more than beach bums.

With plenty of reverb in the guitars and dynamic con­trasts by the drums, “Ancient Winds” is an excellent example of con­tem­porary surf rock.

The Madeira released its fourth studio album, “Ancient Winds,” on Sept. 1. Stu­dents may be familiar with the band because Hillsdale’s own Pro­fessor of Eco­nomics Ivan Pon­gracic serves as the band’s lead gui­tarist.

Like much of con­tem­porary surf rock, “Ancient Winds” is an instru­mental album. Each of its 13 tracks build on one another to tell the story of an epic naval adventure in just 44 minutes.

“The theme of sailing the Mediter­ranean is loose in the back­ground with the ideas of forward motion and groove driving the album,” Pon­gracic said.

The Madeira imme­di­ately cap­tures the sounds of setting sail with the quick-tempo opener “Journey to the Center of the Surf.” The reverb of the guitars and the steady drumbeat invoke the image of a ship ven­turing forth in high spirits. The song cap­tures the optimism and vigor present at the outset of an exciting endeavor.

Even without lyrics, the images evoked by the com­bi­nation of the song titles and music are enough to carry the lis­tener from shore to open water as The Madeira steers a course for an aquatic showdown with “Leviathan” in track 12.

“Instru­mental surf rock is like clas­sical music or a sym­phony. Obvi­ously, they are not the same, but each expects you to use your imag­i­nation. Lis­teners have to fill the gaps in the story after the music and song titles set the stage,” Pon­gracic said.

The nature of an instru­mental album written as a coherent whole largely pre­cludes the selection of singles. For instance, when “Ancient Winds” plays on shuffle, the larger nar­rative of the album is lost. Songs like “Coral Island” no longer sound like a pit stop for sup­plies on a Greek island, but like a campy track from a dollar store “Christmas on the Beach” CD.

One of the most inter­esting places The Madeira expects lis­teners to “fill in the gaps” is the final song, “Into the Deep.” Fol­lowing the intense and up-tempo battle in “Leviathan,” the decrescendo and sounds of waves in “Into the Deep” trigger a sinking feeling.

“The slain monster sinking or the defeated sailors say more about the lis­tener than us,” Pon­gracic said.

Regardless of which side lost the battle, “Into the Deep” is one of the strongest songs on the album. The guitars’ darker sounds and the slower tempo set up a stark con­trast with the cheery beginning, and high­lights The Madeira’s talent for pro­ducing diversity in a genre where songs are not dif­fer­en­tiated by lyrics. 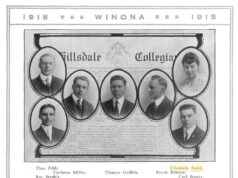 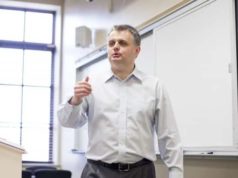 Office Hours: Pilgrimage to the U.S.: Moving to America from communist Yugoslavia 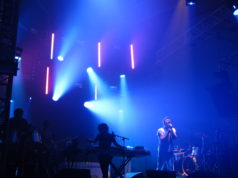