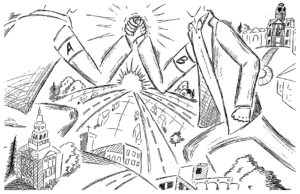 On Nov. 5, Hillsdale res­i­dents will hit the ballot boxes at the public library in order to elect a mayor, four city council wards, city trea­surer, and a city clerk.

The current mayor, Doug Moon, is not running for reelection. Scott Ses­sions and Brian Watkins are con­tending for the position, who cur­rently rep­resent ward I and ward III respectively.

“It does get busier around here, not as much as with the national elec­tions though,” Bonnie Tew, Hillsdale’s finance manager said, regarding the upcoming local elections.

The former city clerk, Julie Kast, resigned in January of 2013 and the city has not yet filled the position, according to Deputy City Clerk Michelle Worden. Amy England and Robilyn Swisher are now running to fill the vacant seat.

The only seat not up for election in 2013 is ward II, which is filled by Ruth Brown. Both Adam Stockford (ward I) and Emily Stack-Davis (ward III) are the only can­di­dates running for their wards as of recently. Their oppo­nents, Laura Smith and Jacob Nieuwsma, chose to drop out of the race and endorse Stockford and Stack-Davis. Because they withdrew from the race late, their names will still appear on the ballot. Finally, William Arnold is chal­lenging Patrick Flannery in the only con­tested ward (ward IV).

As dis­played in last week’s can­didate forum, the election’s most pressing question is, “Will anyone even show up to vote?”

According to Worden, Hillsdale usually has a pretty low voter turnout. During last year’s August primary, only 16 percent of the Hillsdale township’s pop­u­lation voted. In addition, Tew stated that the com­bined total of the 2012 and 2013 elec­tions will end up costing the city approx­i­mately $9,626. The average price tag on a year’s worth of elec­tions for the city typ­i­cally runs between $9,000 and $10,000 range.

This year, many new names are on the election ballot, and for the first time in four years, the mayoral seat is open.

Hope­fully, Hillsdale res­i­dents will combat the lack of par­tic­i­pation and come out in force on Nov. 5 to par­tic­ipate in deciding the future of their town.