As the semester comes to a close, stu­dents have a lot to look forward to: reunion with family and friends back home, Momma’s cooking, and a full night’s sleep, for instance. But for many, the opening of “The Hobbit” tops the list. Antic­i­pation for the movie, which comes out in the United States on Dec. 14, is high among both Hillsdale stu­dents and faculty.

Donald Turner, pro­fessor of phi­losophy, said he is “cau­tiously hopeful” for the “Hobbit” movie, based on what Peter Jackson did with “The Lord of the Rings” trilogy.

That mix of optimism and caution is echoed by junior Josiah Kollmeyer.

“I am very excited about it,” he said. “I know that Peter Jackson, in ‘The Lord of The Rings’ movies, did a great job of making an epic world for Middle Earth, but I’m con­cerned that to get the req­uisite material for three films Peter Jackson will just make stuff up and add in material that is not Tolkien’s.”

Junior Ian Swanson said he sym­pa­thizes with Kollmeyer’s per­spective but still looks forward to the movie.

“I’m so thor­oughly excited, it goes beyond words,” Swanson said, “While I under­stand that people are con­cerned with how far from the books the movie may go, I am really excited to see how Peter Jackson brings to life such a beau­tiful world.”

Swanson accepts that there will be textual infi­delity.

Asso­ciate Pro­fessor of English John Somerville,who is not a Tolkien fan to begin with, does not see the point of making the film at all.

“I have seen what appeared to be a trailer for the film, and it was only by mar­shaling great reserves of inner strength that I was able to watch the whole thing through,” he said. “ Nothing about the movie interests me.”

“I’d probably even be happier with a doc­u­mentary about the history of hair,” he said. “But please, any­thing but a movie about magic dwarves.”

Some stu­dents are simply very excited.

“Eager antic­i­pation you might say,” junior Jonathan Slonim said, describing his feelings regarding the coming movie. “Joy. Effer­ves­cence. It’s the event to which I’ve been looking forward to more than any event in the last year and a half.”

Peter Jackson and the pro­duction team have peri­od­i­cally released movie trailers and video blog posts to give fans a glimpse of the film-making process and the fin­ished product. Kollmeyer has not been watching the blog, though he has seen the trailers. Swanson, on the other hand, says he has watched every video the studio has put up mul­tiple times.

Many actors from the “Lord of the Rings” films, including Ian McK­ellen  and Hugo Weaving, are reprising their roles in “The Hobbit.” British actor Martin Freeman, best known for the role of Dr. Watson in BBC’s “Sherlock” is playing Bilbo Baggins.

Kollmeyer hopes that “The Hobbit” sparks an interest in Tolkien’s lit­er­ature.

With the first movie coming out during Hillsdale finals week, stu­dents planning to watch the film as soon as pos­sible have to take that into con­sid­er­ation.

“I’ll be driving an hour-and-a-half to Lansing to see it in Imax at mid­night, but I have a final at 8 a.m. for Dr. Birzer the next morning,” said Slonim. “Sleep is unlikely that night. I’m going to go see it again that Friday.”

Slonim did try and see if he could adjust school for the sake of the movies.

“I went up to Dr. Birzer, and I told him: ‘Dr. Birzer, I love your class, and I’ll be taking your test at 8 a.m.. But I’m going to ‘The Hobbit’ at mid­night in Lansing. I was won­dering if maybe I can take your test earlier with one of your Her­itage classes?’ To which he replied: ‘I’ll check the schedule. But I’ll tell you your chances would be much better if you were rereading the book.’”

Kollmeyer is taking a more con­ser­v­ative approach to seeing the movie.

“There is a slim chance I’ll go Friday night because I don’t have exams,” he said. “But I do have to pack and may just go home. If I don’t see it Friday night, I’ll def­i­nitely go see it with my family.”

Swanson, like Slonim, plans on seeing the film right away.

“I’m planning on driving to Ann Arbor for the mid­night premier, or wherever they are showing it in its full spec­i­fi­ca­tions (the films will be 3D as well double the standard frame rate in some the­aters) closest,” he said.

Swanson, however, is somewhat con­flicted about the viewing process. 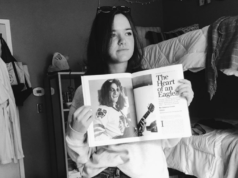